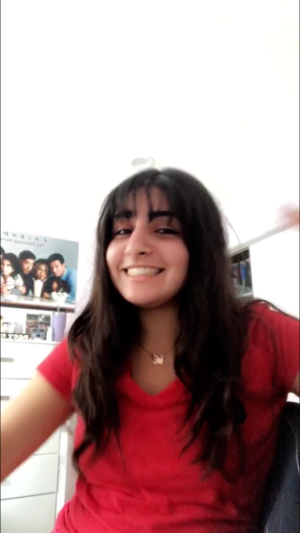 Purple hair? Pierced ear? These teens made unexpected decisions out of boredom and curiosity

Sophomore Nika Bagherian’s hand shook as she raised the needle to her ear. She firmly gripped an eraser behind the needle and following a three-second countdown, Bagherian punched the needle through her left ear, replacing the hole with a single gold stud. With the help of a YouTube tutorial, Bagherian had just pierced her own ears.

It was only her second day of quarantine, but the boredom of staying home was already getting to her.

“It was technically still the weekend, but when I realized I’d have a month of doing absolutely nothing, I felt compelled to be spontaneous,” she said. “I was inspired by a girl piercing her ears on my Snapchat, and I figured I could do that at home pretty easily.”

Bagherian’s impulsive decisions didn’t stop at just piercing her ears. A week later, she decided to experiment with a new hairstyle: fringe bangs.

This decision was more better planned, though. Bagherian watched several YouTube tutorials to master the technique before trying for herself. Her younger brother encouraged her to follow through with the haircut, claiming that “everyone cuts their own bangs at some point.”

“I figured that quarantine was a perfect time to experiment with bangs because I wasn’t going to see anyone anytime soon,” said Bagherian. “If it ends up badly, it doesn’t matter because they’ll just grow out before I even leave my house.”

Sophomore Caroline Keogh also experimented with this newfound freedom when she dyed her hair bright purple out of sheer boredom.

Keogh already had a box of dye at home, so she simply followed the instructions to achieve the bold look. She started by washing and drying her hair, then massaged the dye to a section of hair and completely saturated it with purple color.

Keogh’s thought process was similar to Bagherian’s: she knew that even if it turned out badly, she wouldn’t be seeing anyone anytime soon.

“I was already bored with my hair, and I was in the mood to have some fun,” Keogh said. “There was really nothing to lose, and I didn’t stress about what I was doing.”

In the days after, these girls said they had no regrets about their impulsive decisions. If anything, Bagherian saw this experience as an opportunity for herself to grow, where she learned to let loose and not worry about the what-ifs.

“After piercing my ears and cutting my hair, I realized that I don’t care what people think of me as much as I initially thought,” said Bagherian. “If anything, I think it’s fun to take risks and be stupid. YOLO.”