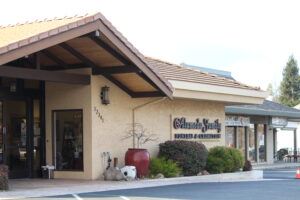 Photo by Photo by Selina Chen

AFCS is a small family-run business, with the current owner Zoe Alameda being the fourth generation to work in the funeral industry.

A lone TV stands next to “Tree of Life,” a grandiose non-denominational mural in Alameda Funeral & Cremation Services (AFCS). The dim lighting of the solemn chapels is a stark contrast to the bright fluorescents inside the pale casket showroom and the sterile crematorium. On a recent quiet Friday afternoon, the establishment was empty save for a grieving family who mourned quietly.

While the way funerals are held have changed due to the COVID-19 pandemic, the business at AFCS has been virtually unaffected. It still held its typical 300 services per year, said Michael Rubino, the funeral counselor and facility manager. Most of the causes of death have been the usual ones of heart disease, cancer and other age-related ailments.

“You’d think funeral homes would have a lot more businesses right now because of what you're hearing on the news, but we’ve only had a handful of COVID-19 deaths,” he said.

Granted, AFSC knows the causes of death for the bodies from hospitals, unaware of whether someone who passed at home was dead due to COVID-19. But from what they know, of the more than 300 services AFCS has held in 2020, only about 5 percent of those were coronavirus-related, Rubino said.

Although coronavirus has been a minor cause of death at AFCS, funeral services have undergone major changes. For example, AFCS has limited the number of people allowed: The big chapel that used to hold more than 200 attendees is now limited to 10.

To compensate, AFCS has taken other measures such as live streaming for those who can’t attend.

In addition to the regular precautions against COVID-19 such as mask wearing and social distancing, AFCS takes every attendee’s name and phone number for contact-tracing.

While most services are held in the two chapels, around 150 cremations take place in the crematory each year.

Cemeteries and the impact of COVID-19

AFCS isn’t the only business dealing with death in the city. Burials usually take place in one of the local cemeteries, such as Opus Xenta in Campbell, Mountain View Cemetery, and Madronia Cemetery, which is Saratoga’s oldest institution, established in 1854.

Sandra Gonzalez, the office manager at the Madronia, said it has responded to the pandemic by limiting funerals to 30 attendees. They are required to stand since no chairs are allowed.

Gonzalez said Madronia has seen some COVID-19-related deaths but not an overwhelming number, noting that it is a small 12-acre cemetery that serves only Saratoga residents.

Even at a time when the U.S. is sometimes seeing more than 4,000 deaths per day due to the coronavirus, Rubino, the funeral home director, finds that most families don’t think about funerals in advance.

“A lot of people wait until the last minute,” he said. “They don't want to talk about [the funeral industry] because they're afraid. But we’re all going to pass at some point.”

During the pandemic, most hospitals and nursing homes are closed for visitations for fear of infections, so a lot of families don’t get to see their loved ones before they pass away, he said.

One such nursing home that had to close down visitations since last March is the Villa of Saratoga Assisted Living Facility, which has resorted to FaceTime and other virtual means of contact between its 120 residents and their families, said activities director Ricaredo Concepcion.

In fact, no residents are allowed to leave the Villa except for required doctors visits. And most medical consultations now take place through video conferences.

But there are exceptions for hospice patients, Concepcion said.

The Villa has also been more affected by the pandemic than other institutions in town that serve the elderly. One of the Villa’s chapels, St. Anne's, was once a comforting space where students performed music and arranged tables for dinner. But now, joyous holiday decorations have been replaced by 14 beds that make up the COVID-19 ward for infected residents. Currently, seven residents are being treated in the ward.

Since the beginning of the pandemic, fewer than 10 residents at the Villa have died due to the coronavirus, Concepcion said. The hope is that with residents and staff having finished their vaccinations on Jan. 25, the worst of the pandemic will be over at the facility.

For his part, Rubino hopes that this year will eventually allow for funeral services to bring in the full attendance at funeral homes so that people can be with their loved ones for one last time. Right now, however, things are as they have been since last March.

“You have no sense of closure, no chance to say your final goodbyes,” Rubino said.