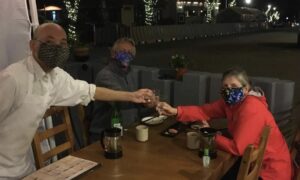 Since California’s June reopening, downtown Saratoga has transformed from its previously deserted state to a brightly lit and lively business area, with restaurants like Hachi Ju Hachi bustling with activity.

Hachi Ju Hachi, located on Big Basin Way, specializes in traditional Japanese cuisine. It was hit hard by the pandemic — fears of virus transmission exacerbated by rising anti-Asian sentiment were likely factors in a sharp decrease in business.

According to research from the JPMorgan Chase Institute, although sales for small businesses suffered a roughly 50 percent decrease in activity, those owned by Asian Americans dropped by 60 percent.

“Lots of customers just stopped showing up,” said junior Emerald Suzuki, whose family owns the restaurant. “Some were scared to catch COVID-19, while others were straight-up racist.”

As a result, Hachi Ju Hachi closed for a few weeks in April and was forced to lay off all its nonessential workers.

However, business quickly returned after the reopening, and Hachi Ju Hachi was able to rehire a few employees as reservations picked up. Despite possible concerns about the new Delta variant, Hachi Ju Hachi has seen its bottom line remain steady.

By juggling her time between school, the restaurant and extracurriculars, Suzuki is able to help around Hachi Ju Hachi a few times per week by performing tasks like cleaning dishes and helping in the back.

Phở Hà Nội, which specializes in Vietnamese cuisine, is a local restaurant owned by sophomore Alicia Nguyen’s family. The family opened its first restaurant in San Jose in December 2016 and later opened another location in Cupertino.

Despite decreasing in-person dining at the beginning of the pandemic, the business was able to stay afloat with a  large influx of takeout orders, she said.

“The restaurant actually did pretty well, because we advertised a lot on social media, to a point where our to-go sales were meeting goals that we would have had without the pandemic,” Nguyen said.

The restaurant’s Instagrams (@phohanoisanjose and @phohanoicupertino) each have several thousand followers, with some video posts generating over 1.5 million views.

Besides focusing on their own business through increased advertising, outdoor dining options and delivery services, Phở Hà Nội also regularly donates food to help out other local businesses and workers, a task that Nguyen occasionally helps out with. Two summers ago, when Phở Hà Nội was donating meals to hospitals, Nguyen would help package and make the food.

Though she does not have time to help out at the restaurant on a regular basis, Nguyen has been exposed to the pressures that come with owning a business, especially during hard times.

“I can see the stress in my parents if business isn’t doing well, so it definitely has an impact on me,” she said. “My parents owning a restaurant just helps me appreciate a lot more of what workers do.”