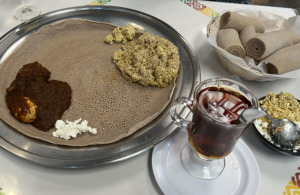 Walking into Zeni’s Ethiopian Restaurant on Saratoga Avenue, customers are immersed into a quaint setting bursting with African culture. Decorated with traditional pieces and paintings, Zeni’s offers traditional seating, where the group sits on short, woven chairs around a large, central plate. Food is eaten communally from the large plate, and typically enjoyed with the hands, rather than utensils. Bordering Saudi Arabia and Yemen, Ethiopian offers cuisine that fuses African tradition with Middle Eastern and Indian-inspired flavors.

Food served at a restaurant like Zeni’s always features injera, traditional Ethiopian bread. Made primarily of fermented teff flour, the spongy bread is served in thin rolls and eaten with various dals (lentil entrees), vegetable sides and other traditional dishes. One of the highlights at Zeni’s is the vegetarian platter, a favorite of both vegetarians and non-vegetarians.

It comes with two dal sides: a cabbage saute, collard greens and a salsa-like mix of injera, tomatoes and spices. All for just $21, the combo can serve almost three people. Zeni’s also offers many meat options that are true to traditional Ethiopian culture, mainly beef dishes of both minced and chopped meat.

To round out any meal, you can also order an Ethiopian Coffee Ceremony, one of the most common ways to serve coffee in Ethiopia. It emphasizes “from bean to cup,” and the entire ceremony can take up to two hours. It starts out with green coffee beans that are then roasted, ground and poured into your mug as a hot, delicious black coffee. Though a bit pricey for a student budget, the experience at Zeni’s is worth the cost when you are in the mood for unique caffeine.

A majority of Ethiopian food is vegan due to frequent fasting periods in traditional culture. All Wednesdays and Fridays are fasting days, and Oriental Orthodox tradition prohibits the consumption of animal products. Many Ethiopians follow the preachings of Islam, the Orthodox Church or Judaism, which restricts pork and shellfish consumption, neither of which are on the menu at Zeni’s.

Zeni’s provides customers with delicious, heartwarming food that is far from typical American fare. It’s just a short drive from Saratoga. So if you haven’t tried Ethiopian food, Zeni’s is a can’t-miss place to start.