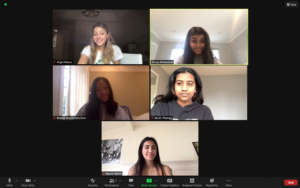 Living Room Conversations (LRC), a program branching off of the national non-profit organization, was started earlier this year by the school’s Anti-Racism Task Force. The program encourages candid conversations between students, but a lack of attendance is making it difficult for participants to have meaningful conversations.

A typical meeting starts with the committee members briefly going over expected rules and courtesies of the discussions. Participants, typically less than 10, are then placed in breakout rooms where a committee member screen shares discussion prompts to kick off an open-ended conversation.

“We have set conversation agreements that include showing respect, suspending judgment, and being authentic,” said junior Brooke Huynh, a member of the LRC committee along with sophomore and head of LRC committee Shreya Rallabandi, freshman Sarah Thomas and juniors Naomi Mallik and Anjali Ganeson.

The program began in January with a well-received initial launch, Rallabandi said.

“We started out small and that was pretty successful because attendees brought their friends and people who were willing to talk,” she said. “In the rooms I was in, a lot of people got to know each other better and bonded over their shared experiences.”

Recently, however, LRC has canceled or postponed four meetings because of a lack of participation. Rallabandi said that sometimes only one person shows up.

She thinks that the low attendance speaks to the fact that students don’t find value in sitting in yet more Zoom sessions and speaking about problems at the school and in society. Rallabandi also believes that students may also have an incorrect preconception about the task force.

“People regard us as a ‘Oh, let’s stop racism!’ club,” she said. “But in reality, our focus is extremely school-centered. We do have bi-weekly meetings, but we’re really close to the school administration. We treat LRC like a gathering in which students are able to hear the concerns and experiences of one another and hopefully leave with a vigor to help heal the school climate.”

Rallabandi acknowledged that some people might be uncomfortable with the idea of having tough conversations about topics like race, but she said they shouldn’t feel discomfort because of the inclusive atmosphere where there are no right or wrong answers.

The LRC committee did not originally plan to host bi-weekly meetings, according to Rallabandi. Rather, it was meant to become an extension of the Wednesday advisory period toward the end of the year, but the district had already outsourced the time period to vendors like HAERT for the rest of the year. Although replacing advisory with LRC would have increased attendance, Rallabandi is unsure if it would be a good idea.

“Nobody is going to wholeheartedly do something they don’t want to do, so forcing LRC on people isn’t a good solution,” she said. “I do think, however, that school-wide conversation is a good step, and we as a committee are trying to figure out ways to catalyze that.”

The committee has already made some changes: Its Wednesday meeting time was changed from 9 a.m. to noon after student input. The committee also began advertising its meetings with Instagram advertising blitzes.

In the future, Rallabandi wants to expand LRC within the community and is hopeful that in-person learning will increase attendance.

Sophomore Eva Ruemmler has attended multiple LRC meetings and said the program helped her connect to the community.

“Everyone was willing to open up about their stories and learn more from each other,” Ruemmler said. “I felt this was a good opportunity to broaden my perspective and learn more about the different cultures of other peers at Saratoga High.”