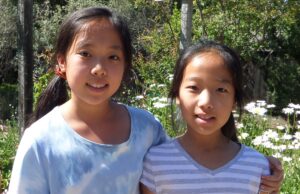 Photo by Victoria Hu
Dora and I, at elementary school age, taking a wholesome family photo in our backyard.

When my 5th grade self went into the Saratoga library to find my older sister Dora, I found her with her friends. Her friends took a moment to observe my appearance, and then commented, “You guys look so similar!”

“Yeah, you do,” they retorted. We facepalmed in unison.

People seem to universally agree that my sister and I, despite our 3-year difference, look extremely alike. It’s understandable, considering our shared genetics, signature ponytails and black glasses.

Sometimes teachers will instantly recognize that we’re related. Sometimes Dora’s classmates ask her if she has a twin sister. Once, when I walked down a hallway, a stranger walked past and said “Hi, Dora!”

It doesn’t help that I also share the same extracurricular activities with her. I wasn’t forced into her footsteps — my interests in math, music and art just also happen to be Dora’s interests. Nonetheless, it can be tiring to live in her shadow as her doppelgänger: Dora has handed me down clothes, parental expectations and even teachers who occasionally call me by the wrong name.

Since she has graduated, there is now only one of us on the SHS campus. However, if you run into us at some point in the future and cannot tell us apart, please help me avoid an identity crisis by using this simple, handy guide to differentiate between us.

#1: Check our height. I’m taller. It’s taken Dora a year to finally admit that she won’t catch up.

#2: Compare our hair. Her hair is mostly straight with slight ripples, while mine is wavier and bushier. Dora has nice radio wave hair, while my hair is more like gamma rays — and just as lethal when it comes to brushing out tangles.

#3: Check for moles. Dora has a number of conspicuous moles on her face, while I have none.

#4: Test our memory. My sister has a great long-term memory, while I don’t. She still remembers the polyatomic ions that she memorized three years ago for chemistry, whereas I forgot them a few days after taking the quiz. Since I have the memory of a blue tang fish, my family calls us Dora and Dory. Simply ask what we ate for breakfast two days ago.

But beyond these superficial differences, I am thoroughly my own separate person from her. I’m a bit more extroverted. I play piano and I dance. I can sketch still-lifes that are far more realistic than my parents’ expectations ever will be. I can inhale novels along with the breakfasts that I forget about two days later.

Hopefully, this list I’ve compiled will help any well-meaning (but confused) people quickly distinguish between me and Dora in the future. Though I will probably spend my first year on campus as “Dora’s sister,” I’m confident that my personality and individuality will allow me to step out of Dora’s shadow and cement my own identity here.