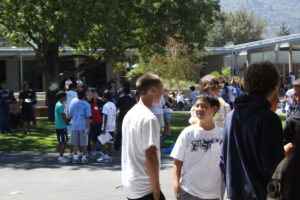 Freshmen chat in the quad on Aug. 27 during an orientation put on by Link Crew.

A cheering gauntlet of upperclassmen dressed in costumes from ninjas to crayons welcomed the 360 members of the class of 2014 as they stepped through the doors of the gym lobby on Aug. 27.

A cheering gauntlet of upperclassmen dressed in costumes from ninjas to crayons welcomed the 360 members of the class of 2014 as they stepped through the doors of the gym lobby on Aug. 27.

“I liked how they greeted us with smiles,” said freshman Kalyani Narayan. “It was very inspiring.”

Orientation began with introductions of the rally commission and the ASB and a performance by the cheer team. The freshmen were then divided into 49 groups of six to eight, with each group led by two or three Link leaders.

Students played games for two hours to get to know each other. After ice-breakers, Link Leaders put together creative ideas to entertain the freshmen. One group began to play “Duck, Duck, Goose!” in the quad, while another took turns hitting a pirate piñata.

“My favorite game was one [where we were given] a list of things to act out. I didn’t know how to play at first, so I started guessing random things,” said freshman Nikhil Ramanathan, laughing at the memory.

Following the games, each Link group went on a campus tour. Along the way, Link Leaders showed the freshmen their classrooms and gave them advice.

“It was nice to pass lessons I’ve learned or mistakes I’ve made on to the new kids, so they don’t have to go through the same thing,” said junior Link Leader Zara Sheikh.

The day ended with closing remarks by English and rhetoric teacher Erick Rector and free Togo’s sandwiches for lunch. Link Leaders stayed after to clean up and were treated to Jamba Juice.

Through a week of planning and two days of training with the Link Leaders, orientation proved to be a success for the Link Crew coordinators and commissioners.

“We were very happy with Link Crew this year,” said Atkinson. “We thought the Link Crew leaders did an outstanding job of welcoming our new freshmen and beginning their next four years on a positive note.”

Link groups met up for the first two Monday tutorials this year with the freshmen to discuss their adjustments to high school life with teachers and their Link Leaders. More Link events, including a cookie decorating session, are planned for later this semester.