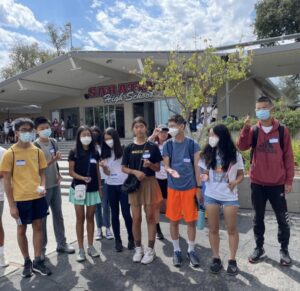 Permalink
The start of the new school year began with the new class of freshmen piling into the school for their orientation.

On Aug. 17, almost 300 freshmen piled into the Large Gym with their heads down and eyes trained on the ground as dozens of Link Crew leaders applauded and welcomed the Class of ‘26 to the school. Orientation began at 8 a.m. and ended around noon, with Togo’s sandwiches served to students and staff for lunch.

Link Crew is the group of upperclassmen who ease freshmen into high school with an orientation, giving tours of the school and more in order to welcome them to the school. Each group this year consisted of three leaders and around nine freshmen. Leader training began on Aug. 16, with members also coming in on Aug. 17 to help decorate welcome posters.

Typical of the interactions was the group led by junior Tashi Vasudeva,  Meher Bhatnagar and Zinneerah Ahmed.

“At the beginning when the freshmen first arrived, we gathered in a group and played games, like unraveling a human knot and icebreakers,” Vasudeva said.

After connecting with the freshmen through fun and interactive games, they offered the freshmen advice, guided  them on a tour of the campus and showed them where the typical freshman classes are located.

Introducing the freshmen to the school made juniors like Vasudeva reflect on their own freshman year integrations, which they missed out on due to online schooling. To Vasudeva, orientation signified that the world was finally transitioning back to normal.

“Overall I had a really good experience, and even related to the freshman in a way, seeing how stressed they were about the upcoming workload,” Vasudeva said.

“It was a little intimidating coming into freshman orientation because the high school is a lot bigger than Redwood Middle, and it was my first time going in depth through the campus, so the link crew leaders helped show us where our classes are,” she said.