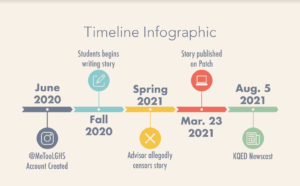 Permalink
One story was about a sexually explicit hand gesture used by players on the Los Gatos football team that was later published on Patch.

Since June 2020, Los Gatos High School has been going through a #MeToo sexual assault reckoning, prompted by an Instagram post from former student Mia Lozoya.

The 7-minute newscast gathered information from six alumni of the El Gato staff, including class of 2021 alumna Alaina Fox.

Fox had been on El Gato staff from sophomore to senior year, when she served as an editor-in-chief of the paper.

According to Fox, the stories Garrett allegedly attempted to shut down included an editorial on the school’s culture of sexual harrassment, a staff editorial criticizing the school’s sex education curriculum and an investigative piece on the school’s football team’s alleged rape culture. He later told Fox that he believed if published, these stories would cause too much controversy among students and teachers.

Garrett did respond to The Falcon’s questions about the situation or the questions from KQED. Other journalism students contacted by The Falcon also declined to comment.

In an interview with The Falcon, Fox said that one of her first experiences with the alleged censorship was when she was writing a sex education staff editorial. Despite the staffers “overwhelmingly” voting in favor of the editorial, Garrett ended up asking her to redirect the story entirely.

During this time, Fox explained, multiple staffers already had a hunch that Garrett was actively rejecting all stories investigating the school’s rape culture, football team or both. To Fox, seeing the comments Garrett left on her story only confirmed their suspicions.

“[Garrett] demanded a total rewrite, which I couldn’t even do and my editors had to step in for because I was too upset,” Fox said. “And instead of criticizing the current sex education, [the article] had to be like, ‘Hey, look at this other sex education [alternative], instead.’”

Fox said that when she had received the notification about the rewrite during her second period class, she “started crying” out of anxiety.

“I felt so weak crying about it, and I felt like he would see it as a sign of weakness or as an invitation to just push me around further [to kill the story] until I broke,” Fox said.

While watered-down versions of the staff and opinion editorials were later allowed to be published, the investigative piece was allegedly permanently shut down by Garrett and had to be published extracurricularly and anonymously through Patch.com, an online news platform where community members can submit articles on local news.

Fox said that the censorship she saw was not only hard to comprehend journalistically, but also psychologically. Before her relationship with Garrett started becoming strained, she was “really close” to him and “probably spent more time with him than her parents” during the school year. After seeing the messages, however, she said she began to feel “terrified” of going to class.

“The thing is, Mr. Garrett was someone I really trusted and looked up to a lot. And I had so much faith in him. This felt like a slap in the face.” Fox said.

Fox explained that, although the story censorship was the tipping point, a lot of her emotions stemmed from a sense of fear and betrayal.

“I know that there will always be some who don’t care. But I expected there to be people who did care. And he was one of them,” Fox said.