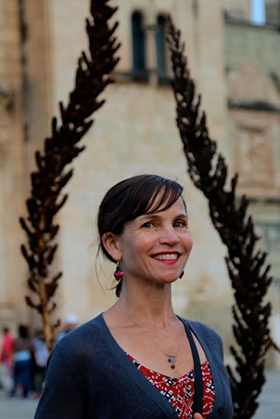 English teacher Amy Keys, who restarted the Creative Writing class and led the school’s WASC effort this year, said she was deeply grateful and a bit embarrassed to discover that she had been named District Teacher of the Year.

“To be recognized by these giants among teachers is one of the great honors of my life,” Keys said. “I have learned an immeasurable amount from my colleagues, and I am continually pushed to be a better teacher by my academically hungry, intellectually curious students and my thoughtful, discerning, generous and caring colleagues.”

The District Teacher of the Year award alternates between teachers from Los Gatos High and Saratoga High. The vote for Teacher of the Year was done by Keys’s fellow teachers, who, along with several administrators, announced the honor to her via Zoom-bombing one of her classes earlier this month. A dozen staff members also did a drive-by salute in front of Keys’s house in Santa Cruz and brought her lemons to signify her ability to turn lemons into lemonade.

Keys said she believes the commendation extends to her close colleagues and students, whom she constantly learns from and collaborates with. In her classroom, she strives to create an engaging learning environment that enables students to develop active learning skills that transfer to other disciplines.

Many of her English 11 Honors students, including junior Isaac Sun, were excited to hear that Keys won the award.

“She's an amazing teacher — very caring and always wants the best for her students,” Sun said. “Just from how meticulously she plans every class, whether that was in person or online, you can really see that she wants you each to succeed. She gives you nuggets of information to digest and lets you think and ponder about everything that you're doing.”