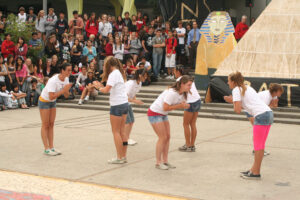 Juniors were determined to show underclassmen how Homecoming quad day is done as they performed for the school at lunch on Oct. 2, but some students took offense at the racial stereotypes in the performance.

Juniors were determined to show underclassmen how Homecoming quad day is done as they performed for the school at lunch on Oct. 2, but some students took offense at the racial stereotypes in the performance.

For a portion of the lunch, the school was in “Saratokyo” as the juniors performed Japanese-themed dances.

The story followed junior Varun Parmar as he tried to learn more about Tokyo after a girl rejected him as a Homecoming date because he “wasn’t Asian enough.” Juniors Kirin Kumar and Kyle Keating helped him as he learned about the Japanese people.

The dances began with a fan and saber dance performed by members of the color guard to introduce Japanese customs. Then, an all-girl performance showed what Tokyo girls enjoy.

After learning about Japanese girls, Parmar took a lesson from the men in Tokyo with an all-guy dance. Harajuku girls then performed in a large dance number, which was followed by a couples’ dance. In the end, Parmar ended up his own Asian girl, junior Jennifer Li, as he danced with her to the Enrique Inglesias song “Do You Know,” also known as “The Ping Pong Song,” while Kumar and Keating played ping pong.

The performance faced trouble over their use of stereotypes and racist comments about Asians during their skit, such as how Asians get into car accidents and have a 4.0 GPA.

“I found it a little offensive,” said sophomore Walter Hsiang. “I could see how it was funny, but they crossed the line during it.”

Because of some of the controversy, the juniors ultimately lost to the sophomore class in quad day performances.

The juniors had hoped to improve over last year’s performance, when they lost to the freshmen due to difficulty with the sound system, among other issues.

“We really tried to get more people involved this year,” said junior Sophia Cooper, “but it was hard because everyone had a bunch of big tests to study for at the beginning of Homecoming week.”

Overall, reactions to the juniors’ quad day were mixed.

“I think that the sophomores were pretty comparable,” said sophomore Tim Rollinson. “Both dances were both pretty short and at the same level.”

The juniors, however, were able to pull together a lot more people to get involved in the quad day, even with busy junior year schedules.

“It was somewhat unorganized,” said Cooper. “Lots of people who said they were going to be in it and then dropped out. But in the end, it turned out all right. I think everyone had a lot of fun doing it too.”