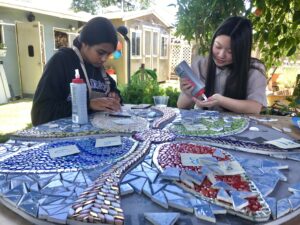 Permalink
Multiple staff and students contributed to the creation of the mosaic, which is displayed at the entrance of the wellness center.

When students approach the entrance of the Wellness Center, they are greeted by a vibrant flower mosaic adorned with intricate, colorful tesserae — tiles made of ceramic and mirror materials — held together by grout, a paste used to secure tiles after placement.

Designed by juniors Aanika Jain and Sunny Huang, the mosaic artwork took five months to complete and was finished last August. The idea was to commemorate mental health struggles caused by the pandemic.

“The pandemic definitely affected me and a lot of the people I know, so I wanted to commemorate that,” Huang said. “It was not to remember the pandemic as an evil thing, but just to remember the impact it had on our lives [without labeling that impact as positive or negative].”

The pair initially pursued creating a mosaic because of the plethora of murals around campus, inspiring her to create a unique addition of her own.

Without much prior experience in mosaic art, she enlisted guidance from local mosaic artist Nancy J. Meyer, who invited Huang and Jain to her studio to experiment with colors during their sophomore year. Afterwards, the pair went shopping for supplies and designed the artwork — which they had always envisioned as a flower — with Meyer facilitating the physical making of the mosaic. At first, they contemplated putting the flower on a square board, but ultimately settled on a circular background because it seemed more “smooth and inviting, [thus] more in line with the themes of the piece,” according to Huang.

“We put down some of the pieces ourselves, but from the beginning, we wanted this to be an interactive mosaic,” Huang said. “Our hope was for the staff and students to help piece it together.”

To fulfill this aspiration, Huang and Jain set up a table in front of the quad at lunch during the last week of the 2020-21 school year, pulling passing students and staff over to help glue down pieces.

Their idea was to have each of the four petals in the flower mosaic represent the class colors — green for freshmen, white for sophomores, blue for juniors and red for seniors. People who came to contribute to the mosaic would put a piece down for their corresponding class.

Faculty members were asked to put pieces in the center of the flower, representative of the integral role they play in the school community.

Afterward, Huang and Jain contacted the school and were directed to plant and operations supervisor Paul Weir, who helped coordinate the installation of the mosaic. Upon its installation, Huang and Jain received compliments from students who viewed the artwork.

“What makes the mosaic stand out is the distinct colors they chose,” junior Jenny Chan said. “I also like the petals and vines in the background.”

Reflecting on the project, Huang acknowledged that it was difficult to get an idea of how the mosaic would turn out before they pieced everything together, despite the meticulous planning beforehand. However, seeing the artwork displayed as a result of their hard work was something they called the “coolest feeling ever.”

“Since it’s displayed at the relatively quiet entrance of the Wellness Center, people don’t see the artwork as much as some of the murals on campus,” Huang said. “But I wouldn’t hang it anywhere else.”