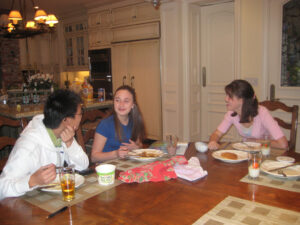 The three friends eat breakfast on a recent Wednesday.

Long-time friends juniors Jenna Finch and Christina Robert used to meet at Starbucks every Wednesday morning for coffee and pastries, making effective use of the late-morning start. The friends eventually came up with an alternative, a way to avoid the unhealthy and expensive

Frappucinos and scones. They began “neighbor breakfasts,” and invited fellow neighbor James Huang to join in on the pancake and waffle making adventure.

“Christina and I used to meet at Starbucks on Wednesday mornings,” said Finch. “We thought it would be fun to make breakfast instead.”

Now, while most students are getting a precious extra hour of sleep on Wednesday morning, Finch is busy making pancakes in her kitchen while Huang and Roberts stand by dropping chocolate chips and blueberry into the batter as it sizzles and browns on the stove.

At the first breakfast, which was held at Robert’s house, Huang failed to bring anything to eat at the breakfast. Feeling guilty, he instead showed up with the childrens’ book, “The Rainbow Fish.”

“It’s a little bit embarrassing to admit, but it kind of became a tradition,” said Roberts. “He now brings a book every time.”

Finch, who tries to include everyone in the cooking process, is usually in charge of the more difficult cooking tasks such as flipping the pancakes because of an accident that happened prior to the creation of “neighbor breakfasts.”

“A few years ago, when Christina and I were making muffins, there was a confusion between powdered sugar and the garlic powder,” said Finch. “We ended up with blueberry-garlic muffins, and Christina now sticks to stirring.”

Finch and Roberts met in the seventh grade because they both walked to Redwood and have been friends ever since. Finch later met Huang through this year’s musical, West Side Story. All three agree that “neighborly bonding is, at times, as important as sleep.”

“They’re a really fun group. Jason and Jenna are amazing,” said Robert. “It’s definitely something to look forward to in the middle of the week with school and everything else.”