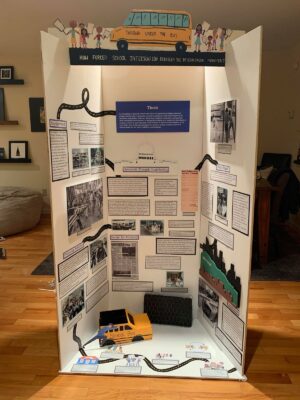 After participating in Santa Clara County’s virtual National History Day competition on March 14 as part of an AP US History (APUSH) project, 11 SHS teams and six individuals will advance to the statewide competition, sharing files of their projects with judges for History Day California (NHD-CA), scheduled for May 8-10. Three other high schools from the county competed, including Castilleja, Lynbrook and Harker.

The advancing individual students were all recognized as champions in their categories, with juniors Audrey Tang and Kaitlyn Tsai for their historical papers, Charlotte Shewchuk and Riya Jain for their documentaries, Karen Lei for her website and Francesca Fernandes for her individual performance.

Details about each group’s and individual’s projects can be found in the sidebar below.

This year marked the first year since 2015 that all juniors in APUSH were required to participate in NHD. Assistant principal Matt Torrens said he used to require that his Geography, World History and APUSH students compete, but when he had to teach four sections of APUSH for a few years, he made participation optional for his juniors, as did Kim Anzalone, the other APUSH teacher at the time.

In 2015, history teacher Faith Daly partnered with librarian Kevin Heyman to coordinate the event, but they stopped as changes to the block schedule, staffing in different departments and field trip requirements arose. Daly said that this year, the APUSH teachers decided to revive NHD’s presence on campus because they felt they had sorted through enough of those issues.

The competition, centered around the theme of Breaking Barriers in History, was originally scheduled to take place at the school, but due to the coronavirus outbreak, judges viewed each submission virtually. Those who created exhibits or performances shared photos and videos of their projects. The judges also canceled interviews with each participant.

Hulme, whose team will advance to NHD-CA for their trifold exhibit on forced racial integration, said that she found the shift to a virtual competition slightly disappointing.

“My group and I were initially very excited to have an interview and show off our project in person,” Hulme said. “I felt that because our project could only be submitted through a maximum of 10 photos, it couldn’t be as appreciated as if it was seen in person, but I’m still very grateful that our group could participate.”

For Sun’s group, which produced a skit on the Emancipation Proclamation, recording their submission was also “unexpectedly hard.” After multiple takes, Sun said the project became very frustrating, but he was glad their hard work carried them to the next round of the competition.

Moving forward, Hulme plans to work with her group to improve their exhibit based on the feedback they received from the county judges. Once they make these adjustments, the team hopes to advance to the national competition, she said.

“My group and I have spent hours on this project, from researching to assembling a final product, and it has allowed us to create something that we are all incredibly proud of,” Hulme said. “We’re really exploring how far we are able to push our limits.”

Below are the descriptions of what each group and individual did for their projects.

Tang wrote a paper on public murals from the Great Depression. Tsai wrote a paper about Clifford Beers, the founder of the mental hygiene movement.

Shewchuk created a documentary about the influence of rock music on American culture. Jain’s documentary focused on the 442nd Infantry Regiment and the fight against internment in World War II.

Fernandes’s performance centered on Elizabeth Hamilton, the wife of Alexander Hamilton, who revolutionized the role of women in American society and politics.