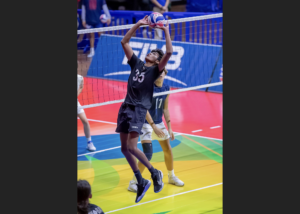 Photo by Kali Duvvuri
Duvvuri sets the ball for his teammate

Permalink
Junior Kali Duvvuri, a top setter in the nation, was recently named a 16U All-American in the AAU Boys’ National Championships.

Junior Kali Duvvuri always tapes two of his fingers together before a volleyball game, regardless of whether he has an injury or not. The first time he won a competitive volleyball game, his fingers were taped together as he leaped to set the ball before his teammate slammed it past the grasp of the opponents, winning the set for Duvvuri’s team. Ever since, he has remained faithful to the pre-game ritual.

Although the taping is superstitious, Duvvuri does not leave the rest of the game to chance — as a nationally ranked volleyball setter, he spends hours on rigorous daily practice, with his weekends and summers consumed by both national and regional tournaments. Standing at 6’3” and blessed with a strong vertical jump, Duvvuri cuts an impressive figure on the court and seems certain to play the game at the college level.

This summer, he geared up to play at one of the most prestigious tournaments in junior volleyball: The 49th AAU Junior National Volleyball Championships in Orange County, Florida. The four-day tournament took place from June 28 to July 1, and the 16U division featured 51 of the best volleyball teams in the country, from Hawaii to New Jersey.

The month leading up to the national championship had not been easy for Duvvuri and his team, Bay to Bay Volleyball 16-1. His inconsistencies in play resulted in him leaving his position as a starter to being benched during the SoCal Cup tournament in early June. The team played worse than they had expected, eventually placing sixth in the 16/15 division.

About a month after their defeat, Duvvuri traveled to Orlando for the AAU Nationals. Initially, Bay to Bay ranked fourth. They began in a round-robin play with the five other teams in their pool, breezing through the first day of the tournament. On the second day, however, they lost their first set 25-19 against the Spike and Serve Volleyball Club team from Hawaii.

“When we dropped a set for the first time, it really woke us up,” Duvvuri said. “We doubled down and started playing really well after that. We didn’t lose a single set for the rest of the tournament.”

“Our team is very talented,” Duvvuri said. “No matter who we face, I always have good expectations for us. This tournament was difficult because it was national, and each team brought their best game [against us].”

Winning the championship wasn’t just a landmark achievement for Duvvuri and his team: He was also individually awarded the prestigious title of AAU All-American for his accomplishments as a setter.

For Duvvuri, winning All-American represents years of tireless commitment to competitive volleyball. His cousin Prathik Rao, a Monta Vista High graduate, was the first in the family to play the sport, and his older brother, class of 2020 alum Mohan Duvvuri, took an interest in it soon after.

However, Duvvuri was reluctant to follow his cousin and brother, until his father took him to his first volleyball tryouts at the age of 9 under the pretense of going out for ice cream. Until that point, he had avoided the sport ardently, having been convinced throughout elementary school that volleyball was a “girl’s sport.”

“I remember I was crying because I didn’t want to play volleyball, and my dad pretty much dragged me out of the car and told me to stop being a little brat and go try out,” Duvvuri said. “So I tried out. It took about 10 minutes to fall in love with the game.”

Duvvuri joined Bay to Bay Volleyball Club, his current club, in 2017. To sharpen his skills, Duvvuri often sets a volleyball against a wall at home 1,000 times in a day as solo practice, followed by a 10-pound medicine ball, which he also sets against the wall hundreds of times.

The club volleyball season takes place in the summer, fall and winter, with a break for the boys’ high-school season which typically lasts from late January through April. During this off-season, Duvvuri plays as a setter and captains the varsity boys’ volleyball team.

Although the school team is not as selective and accomplished as the club, high school volleyball has been an equally enriching experience for him due to familiar faces and team chemistry found in school athletics. Because of his love for simply being on the court during an action-packed game, he enjoys being able to play regardless of whether it is for school or club. On a more social aspect of playing competitive volleyball, Duvvuri enjoys being able to travel and stay in hotels with his team, visit different parts of the country and form a tight-knit network of friends and teammates.

Duvvuri also experienced struggles with school athletics when he was temporarily placed on academic probation. Last spring, he was suspended from playing on the varsity team for three days due to a missing AP Computer Science A project. Although he was able to resolve the problem and return to the team when he turned in the assignment, the incident pushed Duvvuri to increase focus on his academics — especially with junior year and college athletics around the corner.

This year, Duvvuri has also been navigating the college recruiting process, intent on receiving a Division I offer by next year. He would like to stay in California, though he is currently in talks with coaches around the nation from Penn State, NYU, Pepperdine, UC Irvine and UC Santa Cruz.

He is familiar with the process, following in the footsteps of his older brother who plays for UC Santa Cruz. Regardless of what school he decides to attend, Duvvuri has committed to improving both his grades and his game during junior year to raise his profile in the recruiting process. Although academics and athletics can strike a difficult balance at times, he hopes to improve both substantially.

“I’m mainly just trying to be a much better student this year, because at this point, the primary reason a college wouldn’t want to accept me is because of grades,” Duvvuri said. “When it comes to my game, I think I need to work on my defense and my serve. My serve isn’t aggressive enough, and I also need to improve my lateral quickness and speed to the ball.”

As Duvvuri enters what may be the most important year in both high school and volleyball, he is supported by his family, including his parents, brother and cousins, who have encouraged him throughout his volleyball career. Duvvuri said that his parents attend every tournament he plays, traveling with him across the country for important matches. His older brother and cousins, who were an early inspiration for him in the game, are always ready for friendly competition.

Although he doesn’t yet know whether he wants to play professionally after college, Duvvuri knows that his passion for volleyball will only increase over time, and looks forward to the opportunities future seasons will provide.

“No matter where I end up, being able to play volleyball and being competitive is what I love the most,” Duvvuri said. “Winning nationals and All-American is my proudest accomplishment by far.”