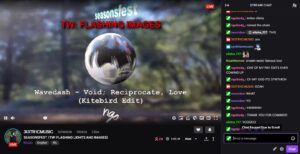 In what felt like a fever dream, junior Brandon Ngo spammed his Twitch chat stream in excitement. Two of his favorite artists, Synthion and HYPERLOCK, unexpectedly showed up to his online music festival in late July.

“Both online and real life friends were checking out the stream,” Ngo said. “It was extremely exciting.”

Online music festivals, which are usually streamed on YouTube, Twitch, Discord or other sites designed for streaming audio, are composed of a lineup of artists like Ngo who play uninterruptedly throughout these events.

Seasonfest was streamed on YouTube and Twitch in both audio and video format, while FASTIVAL was streamed through a custom website, urlfest.com, and exclusively featured songs above 160 beats per minute. From viewer donations, Ngo and other artists fundraised over $50 for the COVID-19 Relief Fund.

“Originally, we weren’t planning to open donations since it was something we were just doing for fun, but after some consideration, we thought it would be a great idea to make something more out of the fest,” Ngo said.

To prepare for his set at Seasonfest, Ngo started mixing songs together in May through Ableton, a digital audio workstation.

“I had learned about Ableton a week prior to starting my set,” Ngo said, “so I threw in a bunch of my favorite songs I felt passionate about into a compressed DJ set.”

Ngo’s DJ mixing journey started last spring in lockdown when he transcribed some of his favorite anime soundtracks to the piano. Tackling this helped Ngo gain a foothold on other difficult projects, like making DJ sets, that he wanted to work on.

He found that the extra time in quarantine also helped him explore his musical taste and boosted his creative process.

“Before quarantine, my music taste centered around loud, powerful drops, but as I’ve discovered new artists, I prefer to focus more on lyrical storytelling,” Ngo said.

Inspired by artists like Porter Robinson, whose struggles with his own creative process were something Ngo deeply identified with, Ngo tried producing his own song for the first time. Gradually, he decided to transition his song into a DJ set instead, as “the main message and tone of the song was something he couldn’t resonate with.”

He described the process as tedious but rewarding. First comes song selection, wherein Ngo thinks about what songs and transitions would mash up well and looks to connect songs with similar tempos and the same key signature.

After selecting songs, Ngo uploads music files into Ableton and edits them by adjusting the tempos of the songs to match or find places to fade in or out of a track. Finally, he adds little snippets of songs or extracts vocals from one song to layer onto another.

Because Seasonsfest also supported a video display, Ngo decided to record the landscape as he was driving for the background of the set.

“Because of my set’s fast tempo, I aimed to clip fast-moving landscapes, which took a bit,” Ngo said. “After that, I added the audio and later some spinning objects for aesthetic, which took eight or nine hours to render.”

Ngo said that the hours put into producing the DJ sets was ultimately worth it because of the immense support he ended up receiving from family and friends.

“The highlight of the day was the reaction to my Seasonsfest set,” Ngo said. “Nearly everyone actively participating in the event complimented my set, saying it was the best one of the festival, which gives me a strong sense of pride about my work.”

Ngo finds music to be his medium for self-expression. To him, music is the most interactive outlet to accurately convey his emotions and messages.

“Like how characters in literature or TV shows can be self-projections of a creator, music expresses the artist through messages or characteristics in the music, ” Ngo said.

Ngo’s enthusiasm for music also branches to the high school marching band, where he plays the vibraphone and marimba. Band has helped Ngo form a family of others who share his same passion for music.

Ngo hopes to make more sets and even produce his own music in the future. While he would like to pursue music production as a career, he feels that it’s difficult as an independent artist to gain enough traction to make a living wage.

For now, Ngo plans to work on music as a side project and hopes to inspire others to make music in the same way that his favorite artists have inspired him.

“I want to create the magic in music that many artists like Porter have shown me.” Ngo said. “Music has had such a deep influence on the way I live life — by making music, I feel that in a way, it’s thanking my inspirations for what they’ve done for me.”