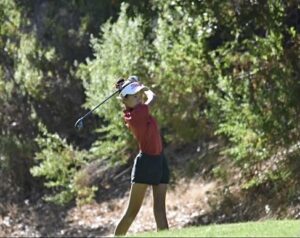 Photo by Courtesy of Savannah Lin

In a golf match in fall 2018, then-freshman Savannah Lin stood behind her ball, contemplating where she should aim. She had just hit an errant shot and now had a cluster of tall trees blocking her from hitting to the green. There was no way she could hit over them, but if she hit under, she might hit a tree trunk.

It was then head coach Dave Gragnola drove up in a golf cart and told Lin to hit the ball through branches toward the hole. Lin thought he was crazy but proceeded with the idea anyway, landing the ball within 3 feet of the hole, in perfect position to pick up a birdie.

If sports occurs in second semester, Lin, now a junior, is going to be one of the two returning players on the girls’ golf team.

Normally, the team plays in the fall, but their season was pushed back to Feb. 22 and, like all sports, might be canceled altogether at the discretion of Governor Gavin Newsom.

Lin had played the fifth and second seeds in her freshman and sophomore years and has been playing golf for a total of three years. In her freshman year, she was part of the 2018-19 team that made it to CCS.

She was first introduced to golf by her dad when he got a membership at the Saratoga Country Club, the team’s home course.

Lin admits she originally joined the school team because she didn’t want to take P.E. At first, she said she found it frustrating and embarrassing to hit bad shots, but she enjoyed the sport more as she got better with the help of her personal coach, Micah Hall, who is also the assistant coach for the girls’ golf team.

“It’s satisfying just hitting one good shot,” she said. “It’s what keeps me motivated to keep on going.”

Lin also enjoys the aspect of competition; she often competes against her teammates, opponents and herself.

As Lin’s dedication to golf grew, she practiced for about two hours every day over the summer during her sophomore and junior years. She has played in several tournaments organized by the Junior Golf Association of Northern California (JGANC) outside of school; at her best, she has placed sixth.

In her most recent tournament on Aug. 29, she tied for seventh by shooting seven over par, her best JGANC tournament score ever. Lin hopes to continue posting good scores so that she can have a chance to play college golf.

Her goal for the upcoming season is consistently shooting under 80 strokes for 18 holes, meaning under 40 shots for 9 hole matches.

Over the past few years, Lin said her main improvement has come from learning more about strategy on the golf course. Lin said she hopes to continue honing her technical skills and intuition, all while serving as a good role model to incoming players.

With four seniors from last year’s team graduating, there is a lot of uncertainty on what the team will look like this upcoming season, but Lin said she thinks the team could still make it to CCS.