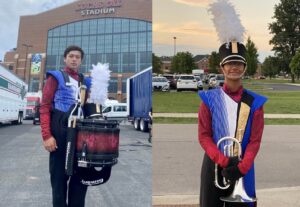 Adrenaline rushed through junior Grant Hough and sophomore Ryan Sanders as they finished their final show “I AM” with the 155-member Blue Devils B (BDB) on Aug. 12 at Lucas Oil Stadium in Indianapolis. Hough plays snare, while Sanders plays mellophone.

“I was in disbelief,” Hough recalled. “I was super sad that I’d never get to perform with [my percussion section] again. It’s definitely the most rewarding activity I’ve ever done.”

BDB is a drum and bugle corps based in Concord, Calif., that competes with other drum corps around the country in the open class division of Drum Corps International (DCI). This season, BDB competed in various competitions all over the country, placing third overall in open class.

“You can think of a drum corps as a high school marching band but on steroids,” Hough said.

For Hough, marching drum corps was one of his major goals ever since he started playing percussion in sixth grade. He had come across a video of the Blue Devils and immediately knew that was something he wanted to be a part of later on.

In Sanders’ case, the opportunity to march in drum corps came by chance: After moving to the state from Texas, he met the director, who offered him the chance to audition.

“I was not planning on trying out for drum corps until I met the director,” Sanders said. “I’m so glad I did because I really like it and I plan on continuing to do it in the future.”

Their plans for the future include marching in the world class division in DCI, working toward auditioning for Blue Devils A, the famed group that competes in the higher division of DCI, and potentially joining other top drum corps in the country.

Both musicians expressed a feeling of appreciation regarding the shared sense of commitment within their sections that led to a higher level of playing. The discipline and independence in drum corps helped them mature as performers, as well as individuals.

Hough and Sanders are excellent musicians in the Saratoga band program, performing in both marching and concert seasons. From Sanders’ precise marching and playing technique to Hough’s valuable leadership in the percussion section as a section leader, the experience they gained during BDB has made them admirable role models for students in the program.

“Seeing Grant march BDB as a result of his commitment to practicing and effort inspires me and all the other percussionists that hope to march in DCI,” sophomore snare player Logan Gecils said.

The musicians spent two months practicing 12 hours a day for six days a week to prepare for their show, resulting in a close bond between all the players. Over the course of the summer, Sanders valued the sense of camaraderie within his section.

“When our final show came around in Indianapolis, [my section] knew it was the last time the whole group would be together,” Sanders said. “We spent as much time together as we could, having lots of fun exploring the city and I definitely miss the amazing friendships I gained over the summer.”