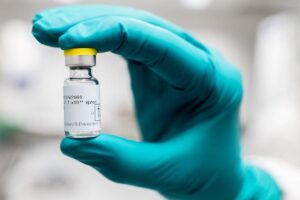 The halt on the J&J vaccine has been lifted, and it is now available for public usage again.

Science and logic are supposed to reign supreme when it comes to public health decisions. When they don’t, the results can be tragic.

The halting in the distribution of  Johnson & Johnson’s (J&J) COVID-19 vaccine is a prime case in point. It was authorized for emergency use by the U.S. Food and Drug Administration (FDA) on Feb. 27 as the only single dose vaccine approved for use. It boasted a relatively high efficacy rate of about 72 percent, especially when compared to more common vaccines, such as ones for influenza. By mid-April, Johnson & Johnson had already shipped out 10 million doses in the U.S.

And then things went awry.

Six recipients of the vaccine, all women between the ages of 18 and 48, developed an extremely rare blood clotting disorder in their brains. One of the women, a 45-year-old from Virginia, died within days, and another was in critical condition. In response, public health agencies recommended halting the usage of the vaccine. Retailers paused distribution as the FDA investigated the blood-clotting cases.

Instead of halting distribution of the vaccine, public health officials should have only investigated the effects of the vaccine on these rare individual cases.

The halting resulted in an estimated 15 million doses wasted or destroyed and widespread cancellations of vaccination appointments. The J&J vaccine was an opportunity to more efficiently distribute vaccines. In a time of crisis, and with the Biden administration’s main goal of getting 70 percent of American adults vaccinated by July 4, such a mistake was a costly loss. With less public trust in the J&J vaccine, the goal is now much harder to meet with the two-dose systems and temperature storage requirements of the Pfizer and Moderna vaccines.

The pause also heightened anti-vaccination resentment as well as many Americans’ distrust of the vaccination. This increased hesitancy could cause more people to forgo taking not only the J&J vaccine but also the other types — inadvertently endangering more people and causing more deaths and hospitalizations than the actual blood clotting disorder itself.

And despite many attempts to increase vaccine confidence and acceptance by health organizations, lawmakers and even corporations, there is still a sizable segment of our country’s population who refuse to receive the vaccine.

Recent polls show that as many as 41 percent of Republicans don’t want to get the vaccine, up from 30 percent before the J&J halting. By some current estimates, as many as 25 percent of Americans will refuse any COVID-19 vaccine.

This is a danger to achieving herd immunity as a country, something that would allow schools, business and normal activities to be able to open up again safely. In order to achieve herd immunity, about 85 percent of Americans would need to be vaccinated. Indeed, getting all Americans vaccinated is one of the most important steps in returning to normalcy.

For the people who are declining the vaccine, the number one cited reason is not trusting the side effects of the vaccine, both in the short term and long term. While many of these concerns are quite valid, the reaction to the six cases of blood clotting has led people to believe that the vaccinations are more unsafe than they actually are.

In fact, some experts estimate that the number of rare blood-clotting cases would not increase past 45 cases, even if the vaccine supply was never halted — the chance of contracting the rare disease from the J&J vaccine is estimated to be less than one in a million. For comparison, one is more likely to die from driving their car to the vaccination site than they are to die from the blood clotting disorder. One CDC official estimates that the decision to resume administering J&J vaccines will have prevented 1,400 deaths in the next six months alone. This far outnumbers the worst-case figures for blood clotting.

Blood clots are not uncommon. According to a UC San Diego Health study, about 20 percent of all COVID-19 patients and 31 percent of those placed into intensive care will start to develop blood clots. Each year, 50,000 to 100,000 of 900,000 total blood clot cases become fatal. As medicines go, the J&J vaccine is far from unique in its health risks.

The story of the J&J vaccine is only a snapshot of the constant ongoing battle between public health officials and a growing portion of the public, who are rapidly spreading misinformation online and overemphasizing the danger of vaccines.

Future policymakers and public health officials should not take drastic measures too quickly, especially in high-stakes scenarios where every decision can cost thousands of lives. They should reflect on this organizational failure and strive to make informed decisions that will benefit our country the most in the long term — by using science and logic as their guiding principles.