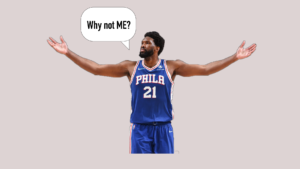 Photo by Zachary Zinman
Embiid celebrates his NBA regular season scoring title as he lifts his hands in the air.

NBA
Out of Nikola Jokić, Joel Embiid and Giannis Antetokounmpo in the race for MVP, Embiid should have won.

Philadelphia 76ers center Joel Embiid pump faked Denver Nuggets center Nikola Jokić right outside of the key. He drove to the rim right as Jokić jumped into the air, attempting to block the shot — but before Jokić realized, Embiid’s was already in the air, slamming the basketball emphatically into the hoop. This crucial moment in the game between the Philadelphia 76ers and Denver Nuggets on March 14 showed why Embiid was one of the best players all season long.

If you follow the NBA, you already know what I’m talking about: the MVP award race. It was down to Embiid, Jokić and Milwaukee Bucks power forward Giannis Antetokounmpo. Though Jokić has already been named the 2021-2022 MVP for the second year in a row, Embiid was the more deserving player.

When players win the award over the course of their career, they are qualified to be  the Basketball Hall of Fame, enshrining themselves in the league’s legacy forever.

As well as Jokić played this season, Embiid simply played better: Leading the league with the most points per game, Embiid ended the season with an average of 30.6 points and 11.7 rebounds per game. In fact, this is the first season a center ended the season as the scoring champion since Shaquille O’Neal in the 1999-2000 season — it’s impossible to deny that Embiid has had an historic season.

Embiid is not just a classic center, but has a diverse skill set. In the regular season, he shot 37.1% from the 3-point line, an astoundingly high percentage for a center. Adding to this his 7-foot height and 280-pound weight, Embiid has the ability to steamroll through his opponents in ways not many can.

Jokić also played without Denver Nuggets guard Jamal Murray and forward Michael Porter Jr., two key scorers for the team. Despite their absences because of injuries, Jokić was still able to lead his team to a 48-34 record, earning them the 6th seed in the Western Conference and a spot in the playoffs.

Antetokounmpo also continued to be a force of nature and a serious contender for the MVP award. As shown in the past and amplified this season, he can always find a way to secure points in the paint no matter where he is on the court. In addition to his strong 6’ 11’’ build, his incredible athleticism has allowed him to average 29.9 points, 11.6 rebounds, 5.8 assists, 1.1 steals and 1.4 blocks per game.

To put it bluntly, no one can attack the paint like Giannis — even after a few years of dominance, many teams still don’t know how to guard him effectively. He dwarfs everyone he is up against.

However, out of all of the candidates for MVP, Embiid was still the best fit for the award. Not only did he prove to be effective from beyond the 3-point line, but he was explosive within the paint. Throughout the season, he was the heart of Philadelphia 76ers, leading them to the fourth seed in the Eastern Conference with a 51-31 record.

Though all of these players were worthy of winning the MVP award, Embiid stood out from the rest. During this past season, he possessed a wide range of skills, making him incredible and unstoppable. Despite Jokić’s achievements, Embiid should have been MVP for the 2021-2022 season.