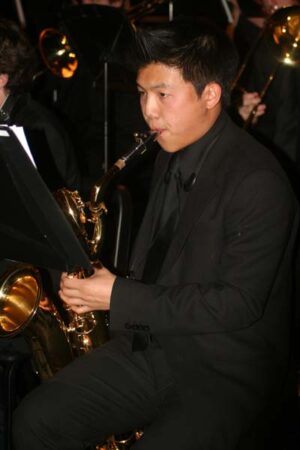 The annual Jazz Cabaret and Swing Dance was held on March 7 in the Large Gym and showcased the musical talents of the Jazz Bands I and II, Men’s Choir, Women’s Choir, Concert Choir, the Redwood Middle School Band and a community band. Music Boosters were mainly responsible for the organization of the event and provided the refreshments and snacks and sold tickets at the door, which were $10 for students.

“It’s not super formal, and this was my first time attending,” said junior Ashwin Siripuraru. “So it was kind of awkward. But I came initially because Mr. Torrens gives us extra credit in my AP US History class, and my little brother [freshman Anshu Siripurapu] was singing as well.”

Held from 8 to 11 p.m, the event featured performances that kept the 250 people who attended entertained.

“Practice was torture, but in the end, it was worth it to see people watching and dancing along to the music,” said junior Christy Pak, who is part of Concert Choir. “I think the best part of Jazz Cabaret is that there is no inappropriate dancing.”

Attendees ranged from elementary students attempting to dance and grandparents of students slowly swing dancing along with the music. Alumni attended the event as well, either helping out or supporting their siblings and friends.

“I thought this year’s Jazz Cabaret was really fun,” said senior Weilynn Chang. “In addition to awesome decorations that were even in the bathrooms, it was a great opportunity to see alumni and hear our friends play live music. The food and drinks were endless and at the end when everyone did the “train” thing together, that only made the night even more memorable.”