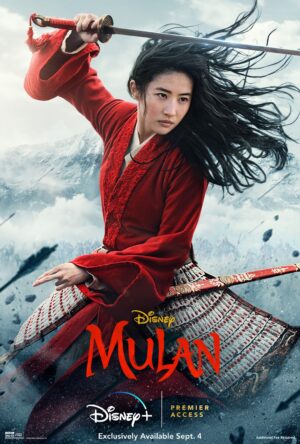 The live-action of ‘Mulan’ displays a prevalent problem in western entertainment.

“唧唧复唧唧，木兰当户织.” These words echoed around me as I sat in my Mandarin class, learning about “木兰辞,” the poem that records the journey of Mulan, who takes her father’s place and enlists in the army for 12 years, earning the highest military honor in Imperial China.

As I grew up, the 1998 animated version of “Mulan” held a special place in my heart not only because she was the only Asian Disney character I grew up watching, but also because of the perseverance and strength she showcases in the poem.

I could not hide my excitement when I heard that the original “Mulan” was going to be remade as a live-action movie. After several unfortunate postponements of the release, my family and I purchased the movie immediately on Disney+ and watched it together soon after its early-September debut.

The film is about Hua Mulan, a young girl who disguises her gender and steps in place of her sickly father to enlist in the Imperial Army. Mulan was born with the “chi,” a magical power similar to the force in “Star Wars.” Along the way, she meets a Witch who guides her to defeat the Northern invaders.

I recognize that it is a daunting task for the team behind “Mulan” to deliver a film that adheres to the family-friendly Disney brand, appeals to the curious Western audience and satisfies the expectations of the Chinese market all at once. However, Disney failed to anticipate political problems associated with “Mulan,” including ignorance about highly controversial Uighur internment camps. Moreover, as a Chinese American with Mulan as my childhood heroine, I am disappointed by the movie’s historical inaccuracy, choppy cinematography, plot holes and ridiculous theme.

The movie opens with a round building that Mulan resides in, which resembles a traditional Fujian Tulou. However, the antagonists of this film are the Rourans, who were enemies of the Northern Wei Kingdom. Fujian Tulou existed only in the Southeastern parts of China, and it came about 500 years after Wei's reign ended.

In addition, during daily meetings between the emperor and his government officials, the concubines stroll freely in the same area, which is a strictly forbidden act. In the matchmaker scene, Mulan’s infamous makeup resembles a style from the Tang Dynasty, even though the movie takes place in the earlier during the Northern and Southern Dynasty (not to mention that her makeup is overly exaggerated).

The director, Niki Caro, explained that she was not concerned about these historical accuracies. However, historical accuracy is crucial to delivering a compelling story, especially to an audience not familiar with the culture. By molding multiple dynasties’ culture and history that spans over 1,000 years into one film, it plants an incorrect and narrow view in many people’s perception of Chinese history.

Moreover, this film included myths that were not even Chinese. For instance, the story about the phoenix that Mulan’s father tells is actually an Egyptian legend, not a Chinese story. The cross-culture mix up further indicates the lack of dedication and respect the production team have for bringing an accurate story to life.

Historical inaccuracies aside, the cinematography is also disappointing, specifically in the fight scenes. The fight scene between Mulan and Honghui during their training only consists of a few unimpressive sword clashes and a “chi” move.

The scene does not convey the beauty of Chinese sword fights; instead, it seems like a hurriedly arranged scene to solely display Mulan’s talents in “chi.” In contrast, in “Crouching Tiger, Hidden Dragon,” a film released more than 20 years ago that became the first Mandarin movie to win an Oscar, included a fight scene between the protagonist and her rival, who utilizes the fictitious “Wudang” martial arts sect. The scene exhibits a much more intricate fight through its complex actions, dynamic camera movements, and rhythmic editing.

The logic of the movie seems flawed and nonsensical as well. Visibly, the Witch (who looks like a raccoon), possesses an extremely powerful version of the “chi” that resulted in her banishment from Imperial China. She is undoubtedly capable of wiping out the Rouran army and the Chinese palace by herself and achieving her ultimate goal of being accepted in the Kingdom. Yet, for some reason, she still obeys the command of the Rouran army. Even more absurdly, she is killed by a mere arrow just before the ending of the film.

Mulan’s journey of getting expelled and rejoining the army is similarly disconnected. When the general learns that Mulan is a woman, he expels her furiously without a shadow of a doubt from the army. However, he changes his mind immediately when Honghui convinces him with a single line, “You would believe Hua Jun, why do you not believe Hua Mulan?” If only my parents changed their minds so easily.

Disney’s depiction of Mulan does not delineate a three-dimensional character who achieves success through perseverance and cleverness; rather, she attains recognition by receiving help from supernatural powers to cheat through hardships and by being gifted with the power of “chi.”

When Mulan is lost on her journey to join the army, a phoenix, which looks like a kite made out of plastic (bad job on the CGI there, Disney), suddenly appears and guides her out of her misery; when the Witch attacks Mulan, the phoenix reappears and saves her. When Mulan is battling the Rouran alongside her fellow male soldiers, her gift of “chi” enables her to win those fights.

The most compelling aspect in the poetic version of “Mulan” is that she is an ordinary girl who successfully overturned the conventional notion that women are inferior to men. Her ability to achieve monumental accomplishment without elaborate powers is what makes her inspirational and iconic to countless generations of girls, including myself. By adding those unnecessary accessories, such as the “chi” and the phoenix, it detracts from the core value that Mulan represents — the most ordinary can achieve the most extraordinary. The remake misguides young girls to think that one can only be successful if one is gifted with natural talents and has the help of others.

The movie feels like an attempt to mask a story of a typical magical western princess with the facade of Chinese culture to use as a selling point. Disney utilizes its global influence to portray Chinese culture fallaciously without thoroughly understanding it. The historical inaccuracy and plot holes are strong indications that the studio was not inherently interested in learning and presenting authentic Chinese culture.

It’s not surprising to learn that while the film scored a 75 percent on Rotten Tomatoes, it only garnered 4.9 points out of 10 on Douban, the Chinese film rating website. Evidently, Disney succeeded in pandering to a westernized audience but failed to impress the people of the culture it should have represented. If Disney wanted to make profit off of my culture and history, they should at least show respect and present an accurate story.