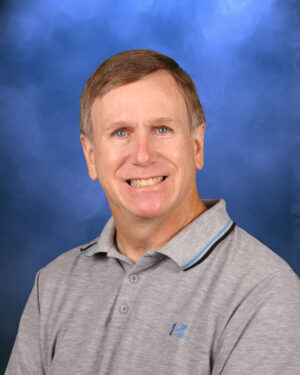 It’s 7:30 a.m. and district IT technician Larry Jens sits in his Library Tech Office, getting ready for a day of fixing tech problems. Four white Macbooks are lined up across his desk and three large cardboard boxes fill the left side of his secluded workspace.

Jens’s primary job is making sure that instructional technology runs smoothly and efficiently. His roles include helping teachers and students with technology issues, preparing computers and getting audio visual systems ready for use. He also looks after the Adobe tools and licensing for the entire district, and restocks classrooms with new tech equipment.

“There’s rarely a day I don’t have something new to do,” Jens said. “My job involves a lot of problem solving. Every day is different, and it requires constant learning.”

Jens is in the process of transitioning to a different role as a Senior Computer Specialist with the district, and the school is looking for someone to help fill his shoes here. No one has been hired yet.

Before joining the school district, Jens was an Engineer and an Engineering Manager for over 21 years. After retiring several years ago, he worked on app development, creating content for the Apple app store.

Although Jens has lived in Saratoga for 25 years and is a parent of two SHS alumni, it was the first time that he was directly involved in school operations.

“It was meant to be temporary,” Jens said. “But just as that was tailing down, the high school needed help.”

After a few years working at the high school district, his temporary position evolved into a full-time job.

Students and teachers typically ask Jens for help with their problems by stopping by his office inside the library; students can also send tech requests to techsupport@lgsuhsd.org, an email provided by the district.

Jens is one of most valuable support staff on campus, someone all teachers have learned to rely on when some piece of technology isn’t working.

Because he often gets multiple requests at the same time, Jens determines who to help out first by considering which issue impacts the largest number of people. He typically prioritizes students and teachers over other requests. He also has a special phone number reserved for emergency requests only.

Akitabox is a system for staff to request technology, custodial and maintenance help. This system is another way the tech department receives requests from staff.

“Some of the issues I face are really straightforward and can be resolved in five minutes,” Jens said. “It varies though. Some can take hours, or even days.”

For example, while fixing issues with students’ Wi-Fi may only take a few minutes, setting up Adobe licenses and preparing the new computers with the software is a long term project that takes months at the beginning of each year.

His greatest challenges have been streamlining the rapid change to online instruction forced upon students and teachers due to the COVID-19 pandemic, as well as the return to in-person schooling.

The pandemic and its challenges

After instruction moved online in March 2020, Jens and his team had to deal with an influx of technological challenges that came with the quick transition to online school. Chief among these were students needing access to various technological equipment, and teachers needing new software and strategies to maximize the efficacy of their classes.

“We had to handle the increased amount of document cameras that were being used by teachers all of a sudden,” Jens said. “We also had to make sure that Google Meets and Zoom were working smoothly for all the teachers.”

Additionally, the school district had to loan out Chromebooks to students who did not own a functioning computer so that they could attend online classes. This is something many schools throughout the nation also did during the pandemic.

To get a computer from the school, students needed to fill out a request and come to the office to pick it up. Jens supervised this distribution, and ensured that the computers were being set up properly.

Jens also had to streamline the transition of the Adobe tools and licenses in the entire Los Gatos Saratoga Union High School District for classes that depended on them. During the pandemic, Jens was able to obtain licenses for students to use the software at home, instead of depending on classroom computers to access applications such as Photoshop and InDesign.

“The transition of licenses was a bit of a challenge,” Jens said. “It was quite a bit different from the model we had been using earlier.”

Because such a large number of students left and entered classes that use Adobe licenses, Jens was forced to remove or add their Adobe license manually each time these schedule changes occurred.

As students return to classes in-person, the school’s increased reliance on technology has exacerbated some of the district’s pre-existing problems, such as a general lack of understanding of how to use various forms of technology.

“Each teacher has had to individually accept new teaching methods that involve technology,” Jens said. “Many were reluctantly forced into it.”

Jens said that while some teachers are reverting back to traditional teaching, many have embraced the integration of technology in their classrooms, incorporating it heavily into their classes this year.

For example, AP U.S. History teacher Faith Daly has continued to use Kami, an online tool for annotating texts digitally, for all classwork assignments.

“There’s no going back to how it was before because teachers have definitely taken a few steps forward,” Jens said. “It’s a lot busier than normal for this time of year. It’s never been like this in previous years.”