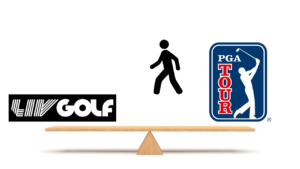 Over 70 golfers have joined LIV’s roster.

Permalink
The league, funded by the Saudi Arabian Public Investment Fund, has raised questions about the country’s human rights issues.

In over 30 years on the PGA Tour, the most prestigious golf tour in the world, decorated golfer Phil Mickelson made just over $94 million. This year, upstart league LIV Golf offered him more than double that amount — just to join their tour.

The Saudi Arabia-backed league has drawn criticism for being an example of “sportswashing.” In this phenomenon, nations with questionable human rights track records take ownership stakes in sports to try to improve their public image.

Many fans and media outlets have criticized Mickelson and other golfers for selling out by accepting what they view as dirty money. For fans who object to the league, there is a simple solution — don’t watch. In any case, the blame should be directed at the organizers of the league, not the golfers.

Abstaining from joining the league will not correct Saudi Arabia’s questionable human rights record. It will only deprive these players of wealth. For players who have worked their entire lives to get to the level they’re at, it makes sense to maximize their earnings.

Moreover, sportswashing is only as powerful as the viewer allows it to be. It’s possible to enjoy LIV golf without associating its positives with the questionable record of the Saudi government. Realistically, a large portion of viewers may not even bother to check who is running the tour and will simply root for their favorite golfers. If anything, the controversy the tour has generated will degrade the image of the ownership group in fans’ eyes, since criticism of the tour brings more attention to the Saudi government’s human rights track record.

Many point to examples like last year’s takeover of soccer team Newcastle United FC by Saudi Arabia’s Public Investment Fund, the same group backing LIV, as a cautionary tale of sportwashing’s impact on people’s views — but it has little to no correlation to human rights. While most people have now turned their attention to Newcastle’s sporting hopes, this does not mean that they are excusing the human rights violations, but simply that they are excited to watch the sport.

A similar situation seems to be unfolding with LIV Golf, which 74% of golf fans in a Sports Illustrated survey said they plan to watch. While some might find the number concerning, it doesn’t mean most golf fans are fine with Saudi Arabia’s track record — rather, it shows they just want to watch entertaining golf and may not care who’s running the events.

If a golf fan wanted to watch LIV Golf, I wouldn’t begrudge them, as it will make the sport more exciting to watch. If a fan criticized the league and said they weren’t watching it, I would understand this viewpoint as well. But when fans pin the blame on the players, they’re only helping draw attention to LIV by generating controversy.

It’s completely justifiable to be angry about the existence of LIV — but fans should make sure they’re directing their anger toward the league itself and not its players. It is possible to be both happy for these golfers cashing out and to hope Saudi Arabia cleans up their act with regard to human rights. The two are not mutually exclusive.