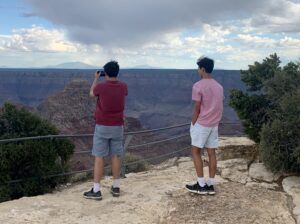 If anyone had told me back in March that I would come to enjoy quarantine, I probably would’ve laughed and crawled back into my mess of blankets and pillows with my phone and a half-eaten bag of chips.

The first day of quarantine was rough. After waking up  “early” at 2 p.m. and grabbing a glass of almond milk for “breakfast,” I returned to my dimly lit room and shut the door. At this point, I began scrolling through an endless stream of YouTube videos and Instagram posts as the afternoon quickly turned to night.

Apparently, my 18-year-old brother had the same idea in mind. For the whole month of April, it was almost as if he didn’t exist. Our rooms were only 10 feet apart, yet both of our locked doors said “Do not disturb.”

Unsurprisingly, my parents weren’t pleased with how our schedules had transformed. They tried relentlessly to drag our zombified corpses out into the blinding sunlight, and after weeks of nonstop complaining, my brother and I finally gave in.

Along with this change came a more solidified school schedule, and I eventually found myself creeping out of my secluded cave more often. Routine trips to the refrigerator turned into conversations with the rest of my family — something I hadn’t experienced for what felt like an eternity.

For my brother and me, this was the perfect opportunity to dig through the pile of video games collecting dust in the closet. Memories flooded through our minds when we saw the smiling faces of Mario and Sonic on the covers, and for the first time after weeks of bland self-isolation, I felt a sense of nostalgia.

It took some time, but our Wii console was finally up and running after 10 idle years. We rebooted our journey on the Wii while reminiscing over our hilariously named Miis and abysmal progress in certain games.

We had a blast. We took turns maneuvering through the mass of carts and items on Mario Kart Wii, flying through the endless planets of Super Mario Galaxy and competing in all sorts of events in Wii Sports Resort.

As quarantine began to roll into summer, my brother and I had built up somewhat of a routine. Instead of isolating in our respective bedrooms, we’d often go on spontaneous trips to buy food or take aimless walks around the neighborhood. This lifestyle developed unexpectedly and rapidly, but I wasn’t complaining about our newfound bond.

Obviously, as siblings, we had our differences. We’d bicker over control of the Wii remote or tease each other, but I couldn’t imagine getting through quarantine without him.

Fast forward to August: the start of a new school year. My brother has already headed off to college across the country. It’ll be a while until he comes back home, but I’ve already marked the date on my calendar.

No doubt the quarantine has been a tedious journey with no end in sight, but having my brother along for the ride made it more bearable.