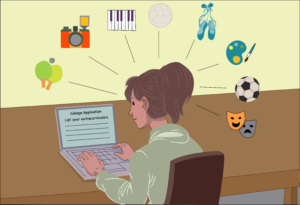 Let’s face it: The academic culture at SHS is cutthroat. Students are expected to aim for the top colleges, which means taking numerous difficult AP and Honors classes, scrambling for notes before the test that makes or breaks their grade and generally not sleeping enough.

The question “What did you get?” is often followed by a sympathetic smirk.

In line with this culture, students have grown to use extracurriculars not only as a way to explore their out-of-school interests, but also as a medium to simply boost their college applications.

And contrary to what you might think, that can be perfectly fine.

A lot of students attend top-tier universities to tie the school’s reputation to their own identities, not because they’re genuinely interested in the college itself. For example, students interested in business may pursue UPenn’s Wharton School of Business, an extremely selective school, out of desire for prestige rather than true interest in it.

I’d argue that if a student can pinpoint a college that is able to give them what they need to succeed in life, participating in extracurriculars purely just for securing admission is not morally questionable. The college should individually excite each student based on a certain program, campus life or a reason that extends beyond the exclusivity of the college name. The idea is that college is a stepping stone to help them pursue what they actually want to do with their life, and so boosting college apps — in the form of extracurriculars — is perfectly valid.

For example, I’m currently interested in USC, specifically the school’s humanities program. The school itself is highly competitive. As part of my effort to stand out, I’m in the Boy Scouts of America. While I enjoy Scouts as a program due to its diverse and engaging activities such as boating and camping, knowing that it might help my admissions chances makes it something I’m willing to devote considerable time to.

Truth be told, most kids end up doing a whole lot of activities they aren’t interested in at first such as violin lessons or a sport like tennis. The activity or sport might become a true passion — or it might not. The initial motivation for doing it matters little or not at all.

Students who are more reserved may benefit from engaging in a team environment and being put in uncomfortable situations, common in sports or team extracurriculars like Science Olympiad. Conversely, students who are more extroverted may find themselves being attracted to more individualistic pursuits such as painting or writing.

Community service is much the same way. Whether it’s volunteering at the library or leading a non-profit in India, acts of good have merits, regardless of intention.

That isn’t to say all such pursuits are free from moral compromise: Many students here pick up multiple extracurriculars, attend only one or two meetings of that activity and exaggerate them on their application to boost their chances into a top school. If a student’s participation is low across the board, they are unlikely to actually benefit from their extracurricular activities, and those actively involved are left juggling a deadweight member.

The main criterion for worthy extracurriculars is that each student should be actively involved in them, not only for their personal benefit but to align with how they describe their extracurriculars in their applications. Without this level of integrity, college admissions become a game where cheating — or at least seriously exaggerating — is the norm.