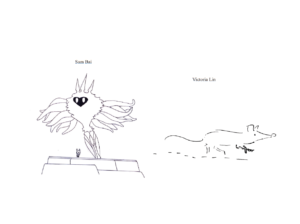 inktober
Drawing something different every day for a month sounds easy; it isn’t.

During the month of October, we decided to take on Inktober, a daily ink drawing challenge originally started by Jake Parker in 2009 as “a challenge to improve his inking skills and develop positive drawing habits.” The rules are simple: Draw something in ink following a list of prompts, one for each day, and repeat this process every day of October. By the end of the month, the hope is that participants’ skills will improve. The following recounts the highs and lows of our experience.

Whoever started the saying “first is the best” has obviously never seen my Inktober drawings. For the past two years, I’ve always drawn the most cursed drawings on the first day of Inktober, and it’s not even because the prompt was bad. I had actually liked the first prompt of Inktober, which was “Gargoyle,” but I did not have enough talent to draw with a pen.

It was a Saturday night and my Discord notification rang. I looked over to see that Sam had already completed the first prompt, so the pressure was on. I Googled the ugliest gargoyle I’d ever seen and decided that it would be a good idea to draw it. Needless to say, the end result was a gargoyle uglier than the reference picture; it looked as if I had never used a pen in my life.

It was a lovely Sunday evening. I sat at my desk, twiddling my thumbs, when suddenly I realized the day’s prompt was “Scurry.” Naturally, I scurried over to my desk and picked up a pen.

The light in my room casted an ambient glow over the thick, white paper — the good kind of paper from Michaels. Because I hadn’t completed my homework yet, I knew I had to hurry through the prompt.

I scrawled on a piece of scratch paper to get the ink flowing. I didn’t want to waste paper so I opened up the same page I drew my first Inktober drawing on and started.

This was my favorite prompt of Inktober and I knew exactly what I wanted to create: a rat with a hat and its footprints behind it to show how it was “scurrying.”

With a few simple lines and dots as the footprints, I finished my second and second-to-last Inktober drawing. I gave up after because I didn’t really like the prompts.

This day was packed full with preparing for my unit three math test the next day. It was 10:45 p.m. and I had to sleep soon or else I would bomb my test. I looked at the problem in front of me with my sheet of binder paper alongside it. The problem made zero sense in my brain.

So, instead of preparing for the math test as I was supposed to, I spent the rest of the day drawing for Inktober, keeping up my streak of drawing one art piece a day. The prompt was perfect. Right in front of me on my desk was a piece of text that I wish could go up into flames so that I would never have to touch it any more. (Just kidding Mr. Yim: If you are reading this, I love math <3.) With a deep hatred growing inside me, I flipped to a new page on my sketch book and started drawing.

I put on some relaxing dubstep music and started replicating the calculus book onto my sketchbook. However, near the top of the textbook, I drew a kindling flame, almost waiting to burst and engulf the entire ”James Stewart Calculus, Single Variable Calculus Early Transcendentals.” Looking back, I really wished I used a ruler to draw the spine of the textbook. As I was exhausted from practicing math problems, my lines turned out squiggly. The book appeared to be made out of jello, resembling square but with all of the sides wobbly. After completing my inked drawing, I looked at the time, and went to sleep, praying that I would be able to do well on the math test the next day.

When I thought about the prompt “Kind,” my mind immediately went blank. Unlike the other concrete prompts this one was abstract. I instantly started thinking about the definitions of kind. A group of objects can be a kind, but then a problem arose: what would the group of objects be. After finding a dead end in that string of ideas, I started wondering what the kindest thing I knew was. Suddenly, the Disney movie “Big Hero 6” and its iconic character Baymax, the marshmallow-like-assistant-doctor-helper-mech, became a prime example of “kind.”

I then started drawing: first his round and squishy body and then the suit of armor that he wore during the latter half of the movie. However, just a blank blob inside a suit of armor would be quite boring, so I started incorporating clouds and birds into the background along with rocket boosters so it would look like Baymax was flying through the sky.

Although Inktober is a fun challenge, it also requires commitment, as drawings take anywhere from less than a minute to over two hours daily. However, even though we skipped days and didn’t last until the end, it was generally a fun experience and encouraged us to challenge our creativity.