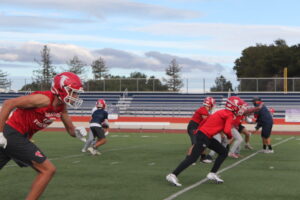 Photo by Atrey Desai
The football team practices for upcoming games on Oct. 21

Trailing 28-0 against Los Altos High, the Falcons hoped to mount a comeback during the second quarter. After turning the ball over repeatedly and allowing Los Altos to score multiple times, the Falcons began to match their opponent’s stellar defense.

Junior receiver Seth Hulme said he remembered that the Falcons had just made a great stop on defense when he looked back and saw junior LG Gaskin screaming in pain from an injury — an injury that ultimately forced the team to forfeit at halftime due to a lack of healthy players.

The game started off with a kickoff return by junior running back Paolo Navarro. The Falcons failed to get a first down after three downs, so Hulme punted on fourth down — the punt failed and resulted in a net-zero change in yards, placing Los Altos close to the goal line and allowing them to score quickly. Los Altos then kicked off back to the Falcons, who got one first down before being stopped. The Eagles turned that possession into 7 points.

Toward the end of the quarter, Los Altos kicked off to the Falcons, who once again turned over the ball on downs. Los Altos advanced near the goal line and was in position to score when the quarter ended.

Los Altos picked up where they left off when the second quarter started and quickly scored, making the score 21-0.

The Falcons proceeded to have their best drive of the game after a Los Altos kickoff. The Falcons secured multiple first downs, but fumbled on a botched snap between center Gaskin and sophomore quarterback Shane Timmons. Los Altos scored again on its next drive, making the score 28-0.

Both teams played tough defense until Gaskin was injured with about 2 minutes left in the quarter.

As a defensive linemen, Gaskin was engaging with a Los Altos offensive linemen when another player rolled into his leg. He fell down and clutched his broken leg.

After waiting on the field for 10 minutes to evaluate the injury, the referees and coaches decided to cut the quarter short, ending the half and sending the Falcons back to their locker room to figure out what to do next.

Falcons forfeit due to injuries

Hulme said the Falcons waited in their locker room for less  than an hour as they tried to figure out how they would play the second half of the game. Eventually, head coach Tim Lugo decided to forfeit the game because of the team’s affected mindset and shortage of players caused by having few players to begin with and a rash of injuries.

“We’re losing about four players a game [to injuries] and that’s not sustainable on a varsity football team,” Hulme said.

The team has already been calling up sophomores from the JV team to play on varsity. Hulme said that most sophomores are playing on varsity due to the team’s player shortage; freshmen are not being called up due to their lack of experience and concern for their safety. The team is also taking other measures due to a lack of players.

Hulme said that because non-lineman do not practice to be linemen, they are more prone to injury and likely to be ineffective during the game.

Hulme said some players will be able to recover before the season ends, but that others were out for the entire season. He added that many others, including himself, are more roughed up than usual because of increased playing time with less rest.

Despite the devastating injury and disappointing forfeit, Hulme said the team is continuing to focus on improving for the last games against Lynbrook (Oct. 22 away), Cupertino (Oct. 29 home) and Fremont (Nov. 30 away).

“We need to improve everything,” Hulme said. “We need everyone to try a little harder and give a little more effort. I think this coming week will have easier competition and we should be able to win.”