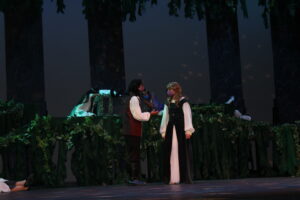 Permalink
Premiering In the McAfee Center on Nov. 12, the show is performed to in-person audiences and live-streamed to a virtual audience.

As blue and green stage lights gradually brightened in the McAfee Center the past two weekends, students dressed in loose fairy-like clothing skipped onto the dark green stage and danced around in circles, their giggles filling the theatre. This was the opening scene of this year’s fall play, William Shakespeare’s “A Midsummer’s Night Dream,” which premiered as the school’s first drama production since the pandemic hit.

Around 130 people watched the show in-person on opening night, a slightly smaller audience turnout compared to previous years, while 13 people watched via the livestream — a number that remained consistent throughout the five performances. The actors staged their final production on Nov. 20, with other shows on Nov. 11, 12, 13, 18 and 19.

“A Midsummer Night’s Dream” follows the story of a love rectangle between Hermia (sophomore Ella Tamas King), Lysander (freshman Krishnen Khanna), Helena (senior Gianna Cagliostro) and Demetrius (senior Jack Bulas). The play is set in the woods of Athens that Hermia and Lysander have run away to and Demetrius and Helena have followed.

The play, a comedy, is outlandish and fantastical, especially in scenes with the fairies, but comical whenever an acting troupe of the laborers shows up. Although there are more dramatic moments, such as when the king of fairies, Oberon, played by senior Taylor Zhou, announces his plan to Puck, his right-hand fairy, with evil laughter or when the four lovers have brief fights, the overall tone of the play is light.

According to junior Olivia Smith, who played Puck, the play presented the actors with an unique challenge: to ensure that the audience understands the gist of the action occurring onstage despite the complex nature of Shakespearean language.

Despite initial worries, Smith was relieved that the audience was able to follow and understand the actions onstage.

“We are particularly proud of any stage combat that’s included in the show,” Smith said. “We got a couple gasps out of the audience when a couple of actors were fighting, so I think we were pretty realistic, which is the goal.”

Smith said she and others in the cast experienced pre-show jitters due to the experience of having a live performance for the first time in almost two years.

“Overall, everyone had a lot of nerves on opening night because we forgot how nerve-wracking it can be to hear a live audience in the theater,” she said. “It wasn’t necessarily difficult, but we had to work harder to get into the right mindset for a live performance.”

To combat this issue, drama director Benjamin Brotzman took the crew through energy-focused warmups that calmed them and helped them focus on acting, blocking out extraneous thoughts about school or homework.

All actors and audience members were required to wear masks for the duration of the play in order to comply with current COVID-19 restrictions. Due to these restrictions, actors had to be careful when they sang or laughed because “it’s challenging to do so without making loud breathing noises into the microphones,” Smith said.

The McAfee has a sound system that picks up microphones’ audio and projects it to the audience, but depending on the direction actors spoke, the degree of amplification varied — a discrepancy that was especially noticeable when actors were walking back and forth on stage. The footsteps of the actors were also easily picked up by the microphones, often muffling their voices. On opening night, multiple loud booms echoed through the theater as a result of audio feedback.

Freshman Diya Kapoor, a member of the technician crew and the technical theater class, elaborated on this challenge, noting that it was difficult to make sure that all the microphones were placed securely on the actors and didn’t interfere with their masks.

Although the crew faced technical difficulties and a post-pandemic learning curve, she said the drama students were still able to put on an amazing performance and improvise with what they had.

“I think our strength lies in how we are able to come together and work well as a team,” Kapoor said. “For what it has started as, this play as a whole has come so far and I’m proud of this entire cast and crew.”