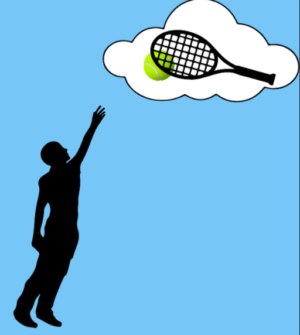 For eight years, I called myself a tennis player.

I went to practices two or three times a week, occasionally attended tournaments on weekends and played against my friends on many afternoons. From the outside, it looked as if I was fully committed to the sport.

The truth was, I wasn’t.

Throughout my time playing tennis, I was never into it like my partners and friends. Instead, I played in hopes of developing an intrinsic love for the sport. I thought my lack of initial interest was a hurdle I could eventually overcome.

My thinking was that as I dedicated more time to the sport, I would gain passion and drive to play it. I poured several years and quite a bit of my parents’ money into the sport, and it seemed a disservice and a waste to let all that be for nothing.

So for years, I simply floundered. I would improve ever so slightly, think about quitting, then remind myself that I would eventually like the sport if I stuck it out long enough. This cycle continued through late elementary school and middle school.

One day in sixth grade, my friends — who had all been playing basketball just as long as I had tennis — convinced me to pick up a ball and play a game with them. I had always been intimidated by the freakish athleticism that basketball players seemed to possess, but I begrudgingly agreed.

And despite my initial aversion, I eventually came around to the sport, thinking to myself “this isn’t that bad.” And the more I got into basketball, the more my enthusiasm for it grew. I would actively watch the games with only a moment’s availability, get hyped off intense plays and push my friends to come to the courts to play with me.

This was what actually enjoying a sport should be like, I thought. It wasn’t trying to find any excuse to get away from the tennis courts, passing up invitations to play because there were 20 other things I would rather be doing. I was enjoying basketball of my own volition.

Ultimately, the inevitable question arose: Why did I still play tennis, when I had no real interest in it? What was I gaining by pushing myself into something that was going nowhere? While it was obvious that my love for tennis was nonexistent, I still called it my sport and dedicated significant time to it. It made no sense for me to continue.

Throughout my freshman year as part of the JV tennis team, I continued to wrestle with this question, debating whether or not to stick it out. After months of going back and forth, at the beginning of sophomore year, I finally decided to call it quits. I canceled my tennis lessons and hung up my racket in the garage, where it still sits today.

At first, I regretted this decision. When my old teammates called me to play tennis and I admitted I just gave up, it was embarrassing. When I saw my old coach who asked me where I had been for months, I felt guilty for not having touched a racket in six months.

Despite these downsides, I don’t regret quitting. I’ve had more time to do the activities I enjoy, haven’t had to force myself to the courts and never have to dread going to tournaments.

While I never played beyond recreational basketball (barring a few AAU games), it remains my favorite sport. I don’t know if I might play tennis again in the future, but for now, my racket sits gathering dust in the garage, a reminder of a sport I stuck with far longer than I should have.