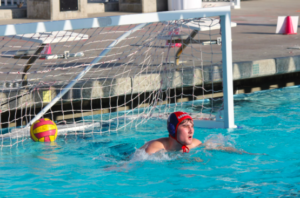 Dylan Overby treads water in preparation for a shot.

Recap: After struggling in 2018, the boys water polo team found success in 2019 within their young starting lineup and new coach, winning league championships and a shot to compete at CCS.

The team ended its 2019-2020 season with a record of 12-2, winning the league championship and reaching CCS, where they were eliminated in the first round by Stevenson High School. Following this stellar season — the most successful in five years — they look to continue and extend their dominant performance despite the holes left by graduating seniors.

Unlike other schools in the lower El Camino League, the 2019-2020 team’s starting lineup was composed primarily of sophomores after then-senior Grant Chen’s season was cut short by a concussion.

“A lot of our opponents were led by seniors, which wasn’t the case for us,” junior wholeset Kendal Jarvis said. “We had lots of young talent in our previous season that will be showcased even more this season.”

Jarvis said that he expects great success. While the graduation of star players significantly weakened many other teams in the league, the SHS team’s starting lineup is mostly intact.

Though Aminzadeh, Kwa, and Chu played an integral role in the team’s success, there are plenty of juniors and seniors ready to step up to fill in the gaps they have left behind. With Juniors Andrew Hong, Kian Kwa, Daniel Jiang and Jonathan Li stepping up to join the varsity, the team has a surplus of players. Still, according to Chen, there is room to improve.

Chen notes how the players need to be more creative with their shots and recommends isolation plays for Kuo and Jarvis.

“This year’s team will do great because the junior class is very good with lots of varsity experience and talented players coming up from JV such as Kian and Jonathan,” Chen said.

However, as of Nov. 29, following Santa Clara’s re-entrance to the purple tier, the season is at risk. Practices, which had been started, were canceled until 2021.

Kuo says that with swim season needing to start by a certain month, it seems more and more unlikely that we’ll be able to compete this year.

The team holds out hope, but the worries for season cancellation are very real. Should the season be postponed any longer, the team won’t be able to compete.

Kuo isn’t optimistic. “Since the winter holidays are coming up, COVID cases won't be decreasing anytime soon,” Kuo said. “If it did start, it would probably be a normal season, but without parent spectators.”

Whatever the case, Jarvis said the team is ready to compete should the season restart.

“I definitely think that the confidence and momentum following our success last year will bring us into another very successful season this year,” Jarvis said.