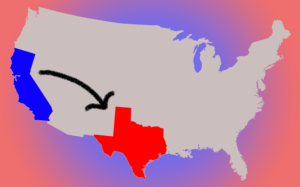 California is known for many things, ranging from national parks like Yosemite to economic hubs like Silicon Valley. But one of the most defining characteristics of the Golden State is its diversity and inclusiveness.

Despite this, many people have been leaving the state. 653,000 people left California in 2019, but only 480,000 moved to California — net negative movement of 173,00 people, a trend that has continued for the past decade, according to the Orange County Register. Oracle and HP, two iconic Californian companies, are moving to Texas; Elon Musk, who recently moved to Texas, is also threatening to move Tesla and SpaceX there.

If California is so inclusive and welcoming, why are so many people leaving? The answer is simple: economic policies.

If California wants to remain the socially progressive place it is, it must reverse its extreme anti-business policies; if it doesn’t, the state will lose its most defining quality.

California is one of the biggest business centers of America, home to many companies including Apple, Gap and the Walt Disney Company. On its own, California is the fifth largest economy in the world.

An analysis by the financial services firm Waterfront found that half of stock-owning Californians under the age of 40 plan to move to another state because of California’s high taxes. The most popular destination is Texas, which has no state income tax.

California also has some of the most regulations in the country. The state is home to statewide rent control, which some economists argue is the cause of California’s housing crisis. Musk cited California’s regulation as one of the main reasons he left the state, saying, “the best thing that [Californian] government can do is just get out of the way.”

If the state continues to push forward with these policies, people will continue to leave en masse. Jobs will be lost, Silicon Valley will no longer be the tech capital of the world and California will lose its powerful economic status.

California has long been the economic powerhouse of America, and it’s not a quality the state wants to lose. California’s economics status is the reason there are so many people of different backgrounds in the state.

The economic opportunities in California attract people from many different backgrounds, which breeds more diversity as immigrants from other states and other countries, like Mexico and China, move to the state. If California continues down the road of business-killing economic policies, a large portion of our workforce will leave along with California’s business. Left unchecked, these economic policies will ruin California’s diverse population and the inclusiveness so many Californians cherish.

California must recognize the exodus as a threat to the state and reverse detrimental economic policies. Actions like reducing taxes to the national average and decreasing overregulation by repealing laws like rent control would all help alleviate the outflow of people. Otherwise, the state risks disabling its economic engine and changing California forever.