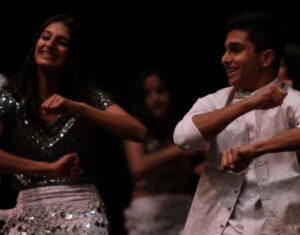 As one of the last in-person events held last year, officers venture into unexplored terrain for the performance.

The rising number of COVID-19 cases in the county has ended any hope of putting on the usual grand display of Indian culture and dance during the annual Bombay in the Bay (BNB) event, usually held in mid-February.

According to senior Irika Katiyar, an officer for the Indian Cultural Awareness Club, the show will likely be a virtual showcase, where each cohort of dancers is filmed, and then those videos are aired live in the manner of a drive-in theater in the school parking lot in early April. The officers worked out this plan with principal Greg Louie recently.

“To continue with the theme of BNB being a show that brings the community together, we are currently looking into doing a drive-in showcase in our parking lot,” Katiyar said. Still, she said the officers are open to redoing their plans given how quickly the circumstances and regulations regarding the pandemic change.

The main goal of the event is still to raise money for a charity helping children in India (the club has yet to choose which one for this year). As of Dec. 3, the officers are unsure about whether they will charge admission for a drive-in event as they do not want to see traffic backing up, although they will probably charge for admissions on another style of event. To replace the money fundraised through admissions, Badve said they are considering selling snacks or merchandise, or just setting up a donation system.

The show normally has grade-level dances, a classical dance, a Bhangra set, a Tamasha set, a singing performance, an all girls dance (AGD) and all males dance (AMD) for seniors that have participated for all four years, a co-ed dance and a skit that ties together all the different mini-performances.

This year, the co-ed dance has been cut, and each grade has been separated into two casts as the county and school guidelines limit meetings to 15 people or fewer, according to senior Neeti Badve, another officer. As of Dec. 3, 84 students had signed up to participate, although the officers expect more to join soon.

Practices will still be held at school, but everyone will be socially distanced and required to wear masks, Katiyar said. The officers will also have a spreadsheet coordinating practice times, and will leave a one hour gap between them so that no practices overlap. Badve said that practices will begin on Feb. 14 and will continue until the show, which is currently scheduled for the weekend before spring break, April 3 and April 4.

These two casts will likely put on four shows in total; each cast’s recording will be played on two different days as the show normally takes place on Friday and Saturday night. Katiyar said that the drive-in idea was introduced as a way to preserve the togetherness of the audience as they watch the show. This way viewers can stay socially distanced and within their own bubbles, while mimicking the experience of a live show.

Badve said that another option the officers considered is to have each cast perform live shows to the drive-in audience, although this was less feasible than filming videos.

The mechanism for distributing the show might still shift since the drive-in style is just one way the officers considered hosting the event — the spacing and ability to broadcast the shows on a large screen might prove difficult. As the event nears and the situation becomes clearer, the officers will solidify their plan.

“I’m excited to see what creative ideas we come up with to keep the spirit of the show the same even with these changing times,” Badve said. “I know everyone’s going to have to adapt as we go but I think it’s nice to have some hope of normalcy that the show represents, no matter what way we do it in.”