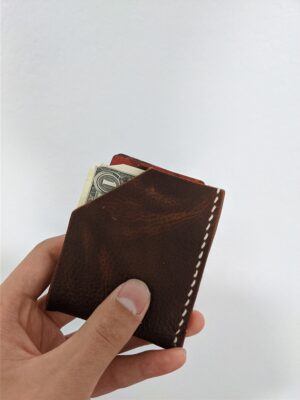 Coming home from school on a Friday, I was excited to see if my package had finally arrived. I was greeted at the front door by the small, about a half-square foot, navy blue roll of leather that cost me nearly $15 and would soon turn into a sexy bifold wallet.

As the coronavirus has forced people to stay inside their homes, many have been faced with the challenge of finding new hobbies to occupy their time. During my time in quarantine, I threw myself into a new passion: leathercraft, the art of turning pieces of leather into something interesting or usable.

My inspiration? YouTube. Prior to any news of the pandemic and shelter-in-place protocol, I watched a video from the channel Corter Leather, which shows how a $5,000 Hermes wallet was recreated using materials that only cost $75.

I thought that the final product was very cool, and it didn’t seem that hard to make, so I began to research how I could get myself into the hobby.

I found r/leathercraft, a helpful and informative subreddit that taught me a lot about the basics of the craft. I found lots of advice on getting started, including what tools I should get and where to buy them, as well as where I should buy my leather.

As recommended by members of the subreddit, I convinced my mom to drive me to a local leather supplier, Tandy Leather, and I bought a single shoulder of natural veg tan leather.

Veg tan, or vegetable tanning, is the way in which the leather is tanned. Vegetable tanning is so named because of its use of natural tannins, or bark, that result in stiffer, tougher leather.

My first wallet was an attempt at several techniques, so I was able to learn a lot; however, the end product was lacking: The edges were smooth, but had poorly applied paint. The pockets were thinned out, but the cuts were wavy. The pockets are also a touch too small, which made sliding cards in and out difficult. I was eager to improve on these aspects in my next wallet.

Because the first week of quarantine had no online school, I found myself bunkering in my workshop (which was really just a small table with all my tools in my tiny room) for hours on end to work on leather pieces.

At first, I didn't know if I wanted anyone to know about this hobby because I thought it might seem strange. However, when my mom posted my work on WeChat and someone wanted to buy one of my handmade wallets, I knew that I couldn’t keep it to myself.

My friends turned out to be very supportive (thanks Andy) and currently, I’ve sold two bifold wallets for $75 each.

Making a wallet is simpler than most might think. Each wallet only takes around four to five hours of labor, and the raw materials are worth around $30 (but only purchasable in large amounts).

I started from the YouTube video itself for resources. Included in the video description was a template for the wallet so that viewers could replicate the wallet themselves.

I printed it out, but I wasn’t satisfied with the design. I really liked the pockets of the Louis Vuitton Multiple wallet, which has chevron style pockets on one side. As an ambitious beginner, I attempted to do my best to replicate this design and draw my own pattern.

For the color scheme of my wallet, I thought about it day after day until I settled on a navy blue back and white stitching and edge paint.

The day all my supplies came, I got to work. I first printed and cut the pattern on cardstock, then traced it on leather and cut them out.

Because I bought the leather at a local store, they didn’t have the exact thickness I wanted and I had to settle for something a little thicker. This thicker leather would make a wallet too thick, so I decided to try my hand at another skill, skiving.

Skiving is the act of thinning the material at the edges to reduce bulk in the final product. This is traditionally done with a skiving knife, but I did not have one at the time. The closest thing I had was a normal utility knife, which was much harder to skive with.

I had to carefully make a cut on the surface of the leather, near the edge, and cut slowly and precisely down and toward the edge, but being careful not to puncture the other side. This task took quite a while, and required me to be in deep concentration so as to not screw up my piece. The result was an acceptable cut that was a bit wavy at the edge, which caused some deformity in the final product, but nothing too noticable.

After gluing up the main pieces of the wallet, it was time to stitch the whole thing together, by hand.

A hand-stitch is more elegant and more durable than the machine-stitch, but tediously weaving the needle in and out pushed me to the limits of my patience. Before I started, I glued the panels of leather together to keep them aligned, then punched the holes for the stitch using a stitching chisel, a tool with a few diamond-shaped prongs in a line that allows stitching lines to be punched with a consistent distance between stitches in a perfectly straight line. Using one thread and a needle at each end, I sewed a pattern called a “straddle stitch.”

Then, after stitching it together, it came time to finish the edges.

A well-finished edge can make even a simple piece look professional. Finishing an edge consists of leveling the edge, rounding the sharp corners and applying an agent to flatten down the fibers to achieve a smooth and shiny edge.

This last step is especially tedious, because the wallet is basically done, but you have to do this detailed work in order to fully complete it. I sanded the edges continuously, until they were silky smooth. After applying water to the edge, I burnished the edge until it was glassy smooth, which took a period of time that seemed like forever. However, after all of this, it is super satisfying to be able to open up your newly made wallet, reach inside the pockets, and put your own cards and cash inside.

What have I learned through all this? Leathercraft is a hobby that requires lots of time and money. People have told me that I can start a brand to sell leather goods under, but I don’t think it’s worth the energy to invest in it. I probably won’t go to great lengths with this hobby because in the end, I just really enjoy gratifying others with my work.