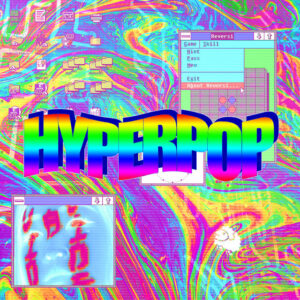 The evolution of music production and inclusion of unique sounds has expanded the definition of music. This experimentation has resulted in a plethora of contemporary genres sprouting from the roots of previous musical classifications — and now the niche genre of “hyperpop” falls right into this category.

So what exactly is hyperpop? American Songwriter calls it a “maximalist, impressionistic and incredibly entertaining” version of traditional pop music, and there isn’t a better way to put it. Essentially, hyperpop is built on the distortion of normal sounds. Beats are often accompanied by booming 808s, glitchy effects, crazy arpeggios and pitched-up vocals to emphasize the juxtaposition of “cute” melodies with the hardest beats you can imagine.

In a sense, hyperpop songs all feel sped up. The overly exaggerated four-on-the-floor kick pattern and the double-time arpeggios push a song forward, with lively hi-hats scattered throughout the track to enhance the illusion of a fast-paced tempo. Detailed glitches in pockets of silence add to the wild, distorted ride of hyperpop.

Yet, hyperpop’s defining characteristic is not its ability to stand on its own, but rather the ease at which it meshes into other similar genres of music.

Specifically, emerging artist brakence incorporates aspects of hyperpop with folk-like guitars to highlight contrast between his songs’ two major elements. In 2020, he introduced his heartfelt single “rosier.” Starting with a soothing guitar and vocal harmonies, he ends with a hyperpop-influenced bass drop and maximalist vocal deliveries to contrast the two major sections of the track.

On the other hand, rising talent glaive takes a different approach by blending his hyperpop elements on SoundCloud with emo and punk rock styles. His trademark sound appears on his most popular single “astrid,” which has over 14 million streams on Spotify.

This hyperpop phenom has collaborated with artist ericdoa on their track “cloak n dagger.” Moreover, ericdoa takes an alternate route in his own music, producing hyperpop with a funky West Coast hip-hop style in his more recent singles “fantasize” and “ifhy.”

With Spotify’s hyperpop playlist garnering over 200,000 likes, it’s safe to say that this loosely defined yet groundbreaking genre is gaining popularity, and it may be only a matter of time before these rising stars skyrocket onto music’s biggest stage.