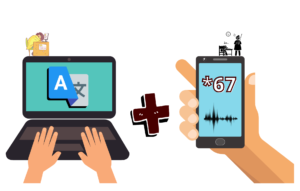 I didn’t expect a prank call to induce such panic.

I used to be quite a troublemaker in elementary school and got myself into all sorts of mischief despite the military-esque regime of the Chinese education system, dabbling in everything from semi-authorized ditching of classes (it was justifiable in theory if we got caught, which we didn’t) to human tug-of-war between the girls’ and boys’ bathrooms (you don’t want to know more about that, I promise).

After moving to the U.S. in sixth grade, I was a newcomer, so I naturally shied away from trouble, instead aiming to be a perfect student, in and out of school. But by freshman year, I had been tame for long enough to let loose a little of my devious nature. Just a little.

So, when the opportunity arose, I did not hesitate to offer my expertise and enhance my friend’s rather bland prank-calling plan.

I scratched out the original plan of using prankdial.com, an website that allows users to make funny calls from any phone number of their choice (through legally questionable means, in hindsight), because it’s too trite for my taste. Rather, I prefer to put a spin on the most primitive method: adding *67 in front while dialing a phone number so that the call shows up as “No Caller ID.”

I sifted through my contacts and immediately saw the perfect victim: Bella, my sister-in-arms in the arduous war known as Nicholson Biology.

Note: Ms. Nicholson is the best teacher ever to grace a classroom, for she is kindly understanding if someone is sleeping in class. With my only concern eradicated, the nerdy side of me ensured that I always chose to sit right next to the podium where she lectures and dragged Bella to sit next to me.

Whenever the lights dimmed and lectures began, Bella had the tendency to doze off right under Ms. Nicholson’s nose, only waking to turn the page when I elbowed her in the side.

I soon realized Bella’s sleeping habits were something I could exploit.

Sitting criss-cross in my evil lair (couch), I typed a few lines into Google Translate on my laptop, turned up the volume and set my phone next to it. All set up,  I dialed Bella’s number with *67 in front of it.

She picked up after three rings; I clicked the “listen” button on Google Translate to unleash the robotic voice:

Hello, Bella Lin. This is the Saratoga High School office. You have detention next Monday because you have been reported for sleeping in Biology class. Please report to Mr. Dwyer’s room after school on Monday for detention. Thank you.

Looking back, I could have speechified the wording a little to make it sound more official (and pompous), but it worked well enough because before I could move on to the next victim in line, my phone pinged with desperate texts from Bella.

WHAT DO I DO

I JUST GOT DETENTION FROM BIO

(Note, the capitalization is an exact replica of the original texts, not an element of style in this article.)

In mock surprise, I replied:

Ms Nicholson wouldn’t do that!!

THATS WHY IM SO SHOCKED

IF THIS WAS [insert another teacher’s name]

OR [insert yet another teacher’s name]

I WOULD BE FINE

After numerous exchanges of wounded betrayal and fake sympathy, I took pity on Bella (read: I felt guilty) and told her that it was a prank call.

It’s a prank call from me

You have no detention

I only picked up for fun

U guys r so evil omggg

Of course, I recorded the prank call and took screenshots to forever preserve and commemorate its success. Sometimes, when the pressure of junior-year school work makes me reminisce about the good old days of freshman biology, I just pull out this recording and have a laugh.