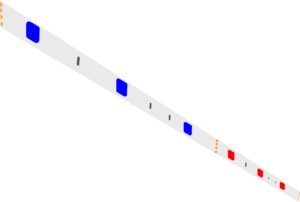 It seemed fine when I bought the first set.

I had seen what must have been thousands of images of blue-hued lights lighting up a room, specifically LED light strips, easily recognizable with their bright red, green and blue flashes in the background of countless viral videos. In fear of missing out, I felt the impulsive need to buy a caseload of them. On a more serious note, I did feel the need to change my environment in the middle of a pandemic that confined me to my room for more than seven hours a day.

After paying $28.65 for 65.8 ft of light strip, the first innocuous package of LED lights came within a couple of days of ordering, and I chose to set them up along the perimeter of my room’s ceiling. It was going well until I decided to play mechanic and try to connect two strip rolls with a plastic connector, which failed to light up the second strip I was trying to attach.

Because I refused to follow directions, I panicked needlessly while testing them, then spent six whole hours trying to figure out what went wrong, wasted an entire roll of tape and in the end, just used the last roll to cover the other half of my ceiling.

With my lights set up, I quickly realized what I had gotten myself into in just the first week. I found that whenever I attempted to do some sort of work, the lights provided to be a distraction.

I was already a chronic procrastinator, but these LED lights made my problem so much worse. Eventually, my music molded to match the lights: slowed and reverbed remixes of songs, mainly consisting of either Playboy Carti “beats produced by Adrian,” or songs like “My Little Dark Age” by MGMT (slowed, of course).

This new subgenre provided background music to my overreaching addiction, worsening my procrastination as I did nothing as my life progressed, but now with “No Wind Resistance!” and “Swing Lynn (slowed down to perfection)” playing along with it.

The worst part was yet to come, as I soon received a new package of lights, which the supplier delivered for free as part of a promotion. Now, instead of taking the 40 pages of APUSH notes that these lights had initially distracted me from, I found more importance in setting up little plastic strips of lights that I got off Amazon.