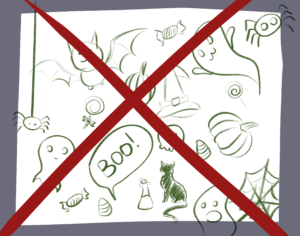 When we think of the word “holiday,” we imagine festivities. We imagine tranquility. We imagine hitting the brakes on the tedious cycle of school-related stress in order to regroup, rejuvenate and, most importantly, celebrate.

These thoughts align fairly well with the Merriam-Webster definition of “holiday” as “a day marked by a general suspension of work in commemoration of an event.”

Yet Halloween falls short of this definition. Where exactly is the “general suspension of work” that holidays supposedly promise?

The reason we don’t get a day off of school for Halloween is that it isn’t a real holiday. It’s just a glorified meet-up with friends in the evening, dramatized through silly costumes and short-lived sugar-highs. Making matters worse is the looming pile of work left to complete if it falls on the eve of a school day.

To say the least, Halloween isn’t what it used to be for most teens. Candy doesn’t have its glistening appeal anymore, our lives are packed with too much stress from school and ultimately, the pandemic really was the straw that broke the camel’s back.

The social bubble of Halloween was popped by COVID-19, with quarantine canceling in-person interactions. Even now, we’ve grown so paranoid about hygiene that post-pandemic trick-or-treating still holds doubts in our minds. What made Halloween remotely a holiday was the social interaction in receiving candy from strangers, and even this aspect has faded and may never return.

Furthermore, the sheer unsustainability of Halloween needs to be addressed. Children scour the streets and beg for bucketloads of candy, only for it to either be consumed in unhealthy amounts or thrown in the garbage with the plastic wrappers they’re contained in. Candy itself is a detriment to society, and getting kids hooked on these toxic pellets at such a young age is pretty damaging if you think about it.

That isn’t to say Halloween isn’t enjoyable, but it’s still relatively mundane. I understand that it’s a fun little social escape in the midst of hundreds of school assignments, but in reality, it’s just another excuse to procrastinate on that APUSH project you haven’t even started.

Compare it to, say, Christmas, for example. We get an entire two-week break, and combine it with a New Years’ Day celebration — I’m getting excited just thinking about it. Even Thanksgiving has its perks: three full days off of school, followed by a glorious weekend of complete relaxation.

What makes the aforementioned holidays even more significant is that we’re truly celebrating something: the everlasting tradition of gift-giving on Christmas, and the reunion of families through a Thanksgiving feast.

The origin of Halloween isn’t well known enough in our generation, and it practically evolved into a superficial “holiday” of trick-or-treating rather than a commemoration of a certain historical event.

Ultimately, it’s a grim reality. Halloween is levels below what we traditionally define as true holidays, and it isn’t Spooky Season — it’s Poopy Season.