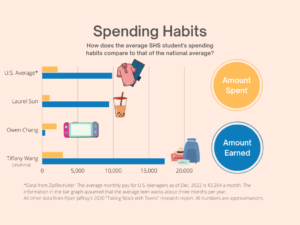 Photo by Lynn Dai
How much money students spent at Saratoga High School compared to the national average.

Permalink
A deep dive into which luxury or entertainment items students like to spend their money on in comparison to previous generations’ spending habits.

From spending their money on boba and video games to concert tickets and makeup products, students between generations have a variety of spending habits. Spending habits vary wildly based on income sources as well; there is a stark difference between the habits of teens who receive monthly allowances versus those who earn money from a minimum-wage job. Here are how some students spend their money, depending on if they earn money from a job, have a monthly allowance, or have little disposable income.

Junior Laurel Sun works twice a week to earn spending money, a contrast to the majority of students who don’t work. In comparison to the 27% of Millennial teens in 2002 and 41% of Gen Xers in 1986, only 18% of Gen Z teens aged 15 to 17 were employed in 2018, based on a report by the Pew Research Center.

Sun, who packages food for delivery and works as a cashier at Hong’s Gourmet, a Chinese restaurant in downtown Saratoga, said she started working because she wanted to earn money without needing to ask her parents for it.

Each shift lasts three hours from 5 to 8 p.m. and the job pays $15 an hour. With tips, Sun said she can earn up to $20 or even $40 an hour. Of the $180 she earns on average weekly, Sun spends around $20 on TaoTao Tea boba a week, adding up to around $1,000 spent on boba a year. She either saves or spends the remaining amount on groceries.

Given that she earns her own money, Sun said that her parents have no problem with how she spends it. Although some might be concerned with the health effects of drinking sugary drinks so often, Sun believes the 5-mile walk balances out the negative health effects of boba.

Sun said her job at Hong’s allows her to have practical use for her free time and also gives her some spending money.

“I doubt any parent would agree to spend $20 on boba every week when they would spend hundreds on a family vacation,” Sun said. “I like how I can spend whatever I want with my own money.”

Junior Owen Chang: learns from his past mistakes

Junior Owen Chang spends two to three hours most days playing his favorite video games like Counter-Strike: Global Offensive (CSGO) and Genshin Impact. He estimates he has spent over $2,000 on video games since middle school.

Chang, who doesn’t have a job, said he gets handouts from his parents and spends it on new video game accounts and certain virtual items like skins customization options, which change the appearance of video game characters.

He would exchange real money for in-game keys, which open crates that may drop a weapon or skin. If he receives an expensive skin, some of which are valued upwards of thousands of dollars, he can sell it on the market for real profit.

“I bought the skins in CSGO because it was just a flex to other players,” Chang said. “It was also easy for me to get my money back out through the trading system.”

However, as he started spending more and more, his parents eventually caught on to what he was doing.

“They ended up taking away my computer for a few days and started inspecting my checking account much more frequently, which made it difficult for me to buy things for a while,” Chang said. “I think that it is also a blessing, as I barely spend any money on video games now other than the occasional $60 to buy a new game.”

However, despite occasionally gaining money from these games, Chang said he now regrets his past spending. In total, while he made $400 from selling accounts, he spent over $2,000 on buying new releases and in-game cosmetics.

Immediately after graduation, Wang went on a week-long senior vacation with her friends, spending thousands on food, activities and shopping in Hawaii.

While there, she splurged on luxury items like a Tiffany and Co. necklace, explored activities like shark diving and ate out twice a day. Upon returning home, she continued to eat out with friends almost every day, spending $15 to $20 per meal.

With the additional free time in the summer, Wang shopped weekly, spending hundreds on clothes and skincare products — particularly Korean skincare and makeup. She spent close to $700 on concerts such as Keshi’s concert in San Francisco, The Weekend’s concert at Levi’s Stadium and the Joji concert in Palo Alto. Despite the high price tag, Wang called the concerts “priceless,” as the artists she listened to were her favorites.

She was able to fund this splurge from the jobs she worked at during the later half of summer. In the last six months of her senior year, she worked two different jobs for 20 to 25 hours a week: Somi Somi, a Korean ice cream store where she was paid $16.50 an hour from February to May, and Go Fish, a local Poke bar where she was paid $18 an hour from June to early September. Wang also earned an additional $4 per hour in tips.

Wang said she felt “much better” spending money she earned and her parents had no qualms about her splurge because they knew she earned it. Even so, they encouraged her to spend less.

After college started that September, Wang started to spend much less. In Los Angeles, she tries to eat more at the dining halls to save spending money, as her parents pay for her dining hall meals, instead of going out to eat at.

“Although I wish I saved more money to invest or spend on credit and savings later, most of the items I bought were worth it,” Wang said.