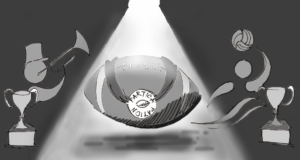 Our football team has lost all of its games this year, besides a 31-14 victory against Monta Vista for Homecoming. For a sport that we have one of our largest school spirit events centered around, you would think that our football team would have a more impressive (or at least passable) record.

This piece isn’t meant to be hateful; I’m just genuinely confused. I’m not saying that our football team is bad, but they’re definitely not as good as they could be.

But knowing this, our school still worships them, making their games school-wide events that students are encouraged to attend and dress up for. Their senior nights are extremely dramatic with parents, families and other students watching the team walk down the football field with roses in their arms and posters in their hands.

Now, I’m calling for some bold action. And by bold, I mean, I fully expect my house to get T-P’d upon the release of this article.

Our school should move the focus away from football and channel it to other, equally worthy programs. We can funnel the attention that football gets and put it into much more productive and successful activities at Saratoga (cough cough, Speech and Debate) or other sports with better records, like boys’ water polo, who have dominated every single game that they’ve had so far this year. They beat Fremont 17-6, Milpitas 19-6, Santa Clara 13-5 and Monta Vista 15-7.

I mean, that’s a sport that I would be excited to watch: a winning sport.

And anyway, all putting football on a pedestal does is make it the center of our school’s sporting universe, and while I’m not saying football isn’t important, it really doesn’t deserve all the attention it garners.

Homecoming, for one, is the most spirited week in the school year but I’m not going to lie, it’s morally damaging to watch one of the least successful teams at our school get to bask in the limelight while consistently triumphant teams and programs like marching band and water polo are shoved to the side and get zero to little recognition for their stellar performances.

Football, out of tradition and lack of creativity, too often gains outsized attention but nothing’s going to change it unless we make some bold decisions and take football off of its undeserved pedestal.