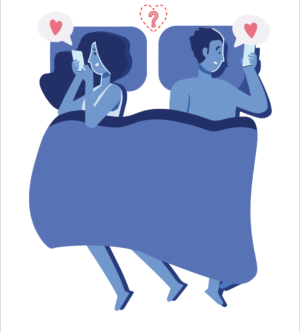 Photo by Ariel Zhou
Should hooking up be considered a norm in our developing generations?

Permalink
Hook-ups have become normalized, greatly affecting children all around.

With the rise of dating apps like Tinder, one-time hook-ups have become more common among the younger generation of app users. These apps have essentially glorified “one-night stands” and “booty calls,”  normalizing one-time physical interactions with strangers only to never speak to them again. “Friends with benefits” are also a common occurrence in our society, where two friendly people cross over into intimate territory.

There is certainly a lot of controversy around what this entails for future generations and the precedent Millennials and Gen Z are setting. Social media apps tend to promote hook-up culture in ways that can potentially be unsafe and inadvertently harmful for those who don’t properly understand the lasting effects it can have.

In public schools and universities around the U.S., hook-up culture has been wildly normalized as students are surrounded by rumors and speculations of their classmates engaging in casual hook-ups, which sparks influence amongst younger generations to do the same. Around 60% to 80% of college students have had some sort of hook-up experience as they gain more freedom and access to contraceptives at a younger age, according to the American Psychological Association. As this influence spreads to the vast majority of teens, hook-up culture only becomes increasingly prevalent.

According to the CDC, the increase in casual hookups directly correlates to the rapidly increasing numbers in STI infections over the past 10 years. The CDC estimates age groups from 15-24 account for at least half of the STI infections reported, though this age group only makes up a quarter of the United States sexually active population.

According to e7health, some studies claim that “mobile dating apps like Tinder and Grindr are in part responsible for encouraging promiscuous sexual activity and encouraging “hook-up” culture.” This indicates how younger age groups who participate in casual sexual relations are the leading cause of this increase in STI’s.

Commitment is prioritized differently by many people. In recent years, younger audiences have had a skewed perception of the amount of work that goes into having a committed relationship with a significant other. Many teenagers, with their busy schedules, cannot offer the mental capacity, emotional support or dedicated time for a relationship, therefore resorting to short-lived hook-ups with people they’re not obligated to care about. Although choosing to remain casual does not define a person as “heartless,” hook-up culture diminishes the significance of real relationships.

Hook-ups notoriously do not work out well. One partner may develop feelings and become emotionally attached while the other doesn’t. This often results in bad blood between partners and exacerbates mental struggles such as low self-esteem, anxiety and depression. Mental health is already a growing issue among teens and young adults, and hook-up culture only raises the statistics further.

The appeal of instant, physical gratification draws in teenagers at an alarming rate. In the face of society, this prevalence of hook-up culture causes youth to lack the capacity for love in long-term relationships. While some “friends with benefits” situations may lead to mutual attachments, it is not a reliable way to develop honest feelings for another person.

Ultimately, every person can choose how they engage in intimate activities, but the negative influence of hook-up culture damages teenage morals for relationships. These “situationships,” as some call them, lead young people into disappointment and confusion. The rise of hook-up culture among teenagers alters the way people value real relationships and should be controlled through smart decisions and commitment.