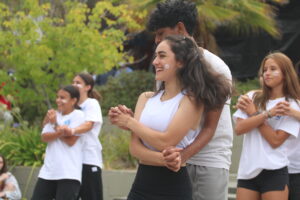 Juhi Karamcheti and Mihir Shaik smiles as they perform their partner dance.

Homecoming
The Class of 2025 worked together to produce creative skits and dances for their quad day.

The crowd cheered on Sept. 21 during lunch as the sophomores ended their Homecoming quad day skit with a group dance using a mashup of songs: “Yeah” by Usher, “Nice for What” by Drake and the “Party Rock Anthem” by LMFAO, Bennett and Goonrock.

The sophomore theme was Power Rangers, and their skit revolved around the heroes hunting for six hidden items in order to save Saratoga’s SAT scores from the antagonists “Gru,” (the main character of Despicable Me),  “Mills,” (the Hoco football game rival), and Gru’s  two minions: “freshman fan” and “MOSAIC”.

“I think the plot was really unique and fun because they included aspects of the school like MOSAIC,” sophomore Anisha Rahut said.

The skit was written and put together by sophomores Timothy Leung, Nirali Garg, Riley Stanton, Aarushi Sharma and Anushka Tadikonda.

“We wanted the Homecoming skit to have a cohesive plot where the Power Rangers would go around and save the school,” sophomore Timothy Leung said. “Eventually the plot all came together.”

The six hidden items were mostly based on the different class themes, including K-pop, The Powerpuff Girls, DC, Marvel, The Incredibles and Bollywood.

Using the hidden items as a segway into the dances, the sophomore class included a K-pop dance, Bollywood dance, all boys dance, all girls dance, partner dance and a group dance for the finale.

“The group dance was definitely my favorite,” Taymuree said. “[During practice], everyone would bring positive energy with them and make jokes with each other.”

Unlike the rest of the quad day skits, the sophomores also included a rap, which was written and performed by sophomore Rylee Stanton.

“I love being on a stage in front of a crowd so rapping was a great experience,” Stanton said. “Everyone was chanting my name after and it was absolutely incredible.”

The sophomore class was pleasantly surprised by the organized dances, creative plot and humorous roasts. With the addition of the excited cheers from their peers, the sophomore Homecoming skit was an overall success.

“The skit was really good and the plot tied to our school very well with how MOSAIC came to our school,” sophomore Claire Zheng said. “I wasn’t expecting the skit to be that good, but it was actually a lot better than I expected.”