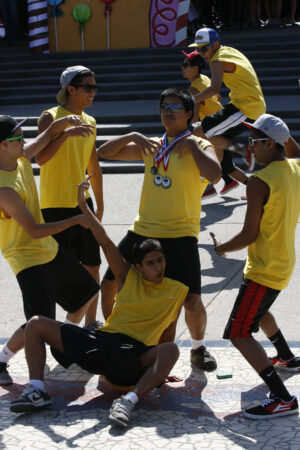 This year, the sophomores stepped up to the plate and improved their quad day for Homecoming through cooperation, division of work and strict schedules. Although more lighthearted themes like Candyland were taken by upperclassmen, sophomores found that their Clue theme was easy to work with.

“We actually liked our theme,” said Sasan Saadat. “It was great for quad day because for the script we could write about solving a mystery, and that was easy.”

After multiple practices, the sophomores believed they were ready to perform on quad day.

“We had a lot of run-throughs, made sure we had the sound down, and that we had separate people assigned to the script, the decorations, and the dances,” said Maggy Lu.

However, as the day of their performance loomed closer, sophomores realized that they were running a little short on time.

“Basically, for the dance with the nerdy glasses, we had to put it all together in just one week before Homecoming,” said Angela Kempf-Luu. “On the day of our quad dance, we had to get to school at 6:45 a.m. just for practice.”

All the hard work paid off. Even though they were still a bit disorganized, the sophomores believe that they did much better than last year. They met for three and a half weeks to write their script, put up decorations, and practice the quad dance.

“Our quad day was of better quality this year, because last year we didn’t have many dances,” said Rohan Cotah. “Improving from two dances to an entire quad day performance was really good.”
Still, the sophomores experienced a few difficulties during the lunchtime show.

“Sometimes during the dance we were kind of uncoordinated, but we got it back together after awhile,” said Fred Feyzi. “The music was a bit quiet, and one time I think the music started a bit late, but overall it was pretty good.”

The sophomores’ enthusiasm this year really helped make their quad day exceptional. In total, about 65 sophomores contributed to Homecoming festivities.

“We had a lot of participation and I thought that was great,” said Kempf-Luu. “I’m very proud of my class.”