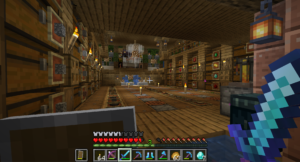 We watched tensely as Andrew pulled out a firework rocket and plummeted bravely into the abyss of the Nether (a hellish alternate dimension) to explore the many recently added biomes. Two seconds later, the dreaded words showed up in the chat: “AnduluLi fell from a high place.”

His elytra. All our fireworks. Full diamond armor. Gone. For the third time that day. Luckily, Rohan had backups stored and we weren’t about to give up our hard-earned goods just to follow Minecraft etiquette, so we just reverted to a previous version of our world. No harm done, except to Andrew’s self-esteem.

Other people might have been starting non-profits, running online classes or developing some useful skills, but our quarantine project was the best of them all: building the most epic Minecraft world possible. Not that building sugarcane farms and killing creepers aren’t useful skills, they just aren’t exactly, well, appreciated by most high schoolers.

Our main motivation for creating the Cararraverse, which we named after Rohan’s YouTube channel Carrara, was to stay in touch after a lot of the activities we used to do together pre-COVID, such as laser tag, escape rooms and rock climbing, were canceled. A few weeks after in-person school closed in mid-March, we jumped into the Minecraft grind so fast we started feeling like overly enthusiastic middle schoolers.

Using LogMeIn Hamachi, we overcame the problem for opening up the world without being on the same WiFi. Every day, Rohan would host the world using his laptop; Alan and Andrew would join at various times, grinding out and stocking supplies, and slowly building up our glorious base.

Upon spawning in the world, we explored a bit, coming across a village. Inspired by PewDiePie’s Minecraft series, we terrorized the village, building our base right in the village center, and trapping villagers into boats for later trading purposes.

Thankfully the villagers didn’t know how to file lawsuits. Or maybe they just couldn’t find a lawyer — they only had weaponsmiths and librarians for some reason.

Almost mirroring 2b2t (Minecraft’s oldest anarchy server) in chaos, we planted sweet berry bushes (which, for some odd reason, really hurt to move through) throughout the village as a line of defense, scattered random plots of farmland for wheat, carrot, and potato production, and left random creeper-craters strewn throughout the village, especially near the river. Rohan, who had been deprived of the wonders of Minecraft his entire childhood, had no idea what was going on and spent most of his time hitting trees with a pickaxe while Alan and Andrew built our fancy house featuring iron-block floors, the Minecraft equivalent of Gucci leather.

Being environmentalists, we converted once-barren plains biomes into lush forests, using saplings collected after cutting down trees. Unlike environmentalists, we unrepentantly chopped down the trees as soon as they reached maturity to collect more wood. Legend has it that the screams of murdered trees still haunts our grove.

The Minecraft gang, as we fondly called ourselves, also entered the industrial revolution as we began automating our farms. Trying to organize the farm plots, we implemented a tower for growing food, each level containing a different plant. We also painstakingly constructed a mob farm, resulting in a few too many falls from high places. Also, we had an automated iron farm, which is essentially an infinite Gucci leather generator, just in case we didn’t make that clear the first time.

After draining the overworld of its resources, the gang decided to pillage the Nether of its luxuries. Building a nether portal right in our storage room (wise decision, right?) Andrew and Alan first began exploring the nether, plundering a nearby fortress and carefully avoiding the pesky zombie pigmen, one of which almost pushed Alan and successfully pushed Rohan off the bridge.

Although quarantine seems never-ending, our time on the server was fleeting. We defeated the ender dragon, milked endermen for enchantments by creating an XP farm and built a nether railway system that would have made Andrew Carnegie jealous. He also probably would have been jealous of our infinite iron farm, but that’s probably getting old.

But once we discovered an ocean monument, our fate on this server was sealed. We attempted to drain it for days on end, just to get shot in the face over and over by guardians. We probably spent 87 percent our time dying and trying to retrieve the assortment of diamond pickaxes, fireworks, and baked potatoes we dropped. The other 23 percent we spent raging at how annoying the guardians were. As you might expect, we didn’t get much draining done.

After a week of yelling at the water while the guardians drifted smugly by, we surrendered. Our Minecraft adventure was over. Rohan occasionally went back to tickle the guardians with his crossbow (aptly named Crossbowhan), but no one was interested in dying again. It was not the most satisfying note to end on, but we were pretty proud of what we made. After all, we had infinite Gucci leather…