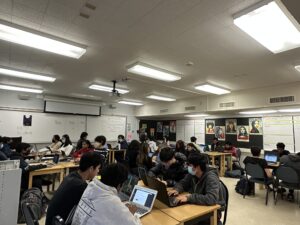 Photo by Michelle Wan
Anzalone subs for an APUSH class while Morelle is on leave.

Permalink
As Margarita Morelle finishes off the first semester, she has announced her maternity leave to spend more time with her children.

As the spring semester came to a close last year, U.S. History teacher Margarita Morelle knew that starting off the 2022-23 school year was going to be difficult. After taking her first maternity leave in February and giving birth to her daughter Luna in March, she decided to take her second maternity leave between October and December this semester to spend time with her newborn daughter.

The state of California allows for a 3-month maternity leave immediately after having a baby and another 3-month leave anytime after. Historically, most teachers take the two 3-month leaves together as one longer six-month leave.

“My initial plan was to take leave right after having my baby and not come back until this October or November,” Morelle said.

However, due to summer construction on campus, Morelle’s classroom had to be completely cleared out. She knew it would be too hectic for a substitute teacher to both set up and teach her class, so she decided to save her next 3-month leave for later.

“Since the start of the year is an important time to get things situated, I wanted to come back and set up the room for myself to get the class running,” Morelle said.

Morelle said that she had everything already planned out for her leave, which started on Oct. 17, and has created a daily calendar that the substitute teachers can follow to stay on schedule with her initial lesson plan.

Having gone on maternity leave in the past for her older child, Morelle considers herself well-versed at laying out descriptive lesson plans for the substitutes to follow. All grading for the assignments will be done by the substitute, and all of the worksheets, calendars and tests are Morelle’s.

Morelle said she is excited to spend some quality time with her daughter and celebrate her first holiday season with her. She plans to return on Jan. 9 at the beginning of the second semester.

“I’m really happy I was able to make time for my kids,” Morelle said. “They are growing up so fast.”