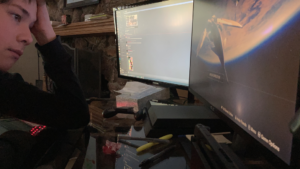 Michael Fok, the author of this story, sitting at his PC after finishing every single activity in the game of Destiny 2 for the tenth week in a row.

The news is full of success stories from people who made it big during the year in quarantine — but what about everyone else, the 99%, the people who considered just making it to this point a success?

“Young teen becomes a millionaire off of pandemic hobby …”

The Reddit news feed blurs as an unexplainable tear forms in the corner of my one open eye at 8 a.m. Noticing the time, I consider getting out of bed and showering for my first class, but it’s a red day and I don’t need to have my camera on for my first class, so I give up on attempting cleanliness and continue scrolling to the tune of Tom Jones’ “It’s Not Unusual” playing in my head.

Since the beginning of quarantine in March 2020, success stories of kids transforming their passions into businesses or starting Mother Teresa-like nonprofits have filled the news. For the vast majority of the population, however, the story has been the opposite — we can hardly get out of bed every day.

With Zoom meetings until almost 1 p.m. at least four days a week plus a never ending pile of homework, it can be difficult to finish all your schoolwork — this isn’t counting the various other activities people might have to do in a day, like household chores or extracurriculars. Sure, some may have more to do than others, and sure, some tasks are harder, but what’s important to keep in mind is that personal struggles should not be compared — it’s OK to struggle with the “little things” that might be a big deal to you.

Not everyone can have a front page-worthy lockdown success story that they can brag about to their friends; in fact, not everyone should have one of those, because if they did, it wouldn’t be as special. Being able to say that you made it through, that you’re doing just fine and that you’re ready to move forward past this one miserable year is a mighty victory on its own.

As a result, it has become more important to have some other way to cope with the deluge of school stress. Whether it is exercising, binging a new anime series or picking up a new game, being able to get a clear head by wasting a day is something that’s more important now than ever.

In my case, when I was feeling down in February, I took to the skies in “Ace Combat 7: Skies Unknown” and threw away a few days by gaming, trying to learn how to do a post-stall maneuver instead of continuing to struggle with chemistry. I still keep up with the habit today — the more down I’m feeling, the higher and faster I fly.

What the blight of 2020 taught me is that between all the “have-to” tasks that school and life bring, it’s important to be able to allocate time to just do whatever makes sense to you and feels right. After all, it’s not unusual to be sad at any time — just don’t forget to keep your head up sometimes.