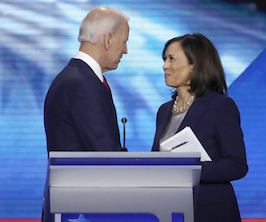 Although Harris was arguably a safer call than other candidates, including senators Elizabeth Warren and Tammy Duckworth, her appointment caused some backlash among some far left progressive observers (mainly Sanders supporters) and illuminated multiple flaws within American politics.

One of the biggest sources of outrage was fueled by Harris’ background as California’s attorney general. Some accused her of protecting police from investigation or being held accountable for their actions.

This summer, over 15 million people across the nation rallied together and protested against the use of excessive force and brutality by police upon Black people. Although Biden has y affirmed the importance of keeping police officers accountable for their actions, his choice of appointing Harris shows that he was not fully invested in supporting the movement.

While there are many other areas of consideration that feed into a VP pick, through the lens of the BLM movement and police abolitionist movement, almost any other choice would have been more affirming than Harris and her prosecutorial record.

Harris’ appointment has revealed another alarming phenomenon: the nation’s dangerously steadfast subscription to identity politics. After Biden announced his appointment of Harris, people across the nation rejoiced at the prospect of Harris becoming the first ever Black, Asian and female vice president, citing that her racial and gender identity would best position her as an advocate for marginalized communities.

At first glance, this logic seems to make sense — a person of color vice president would be most likely to prioritize minority welfare, right?

In Harris’s case, not exactly.

Throughout her consecutive terms as a California state senator, critics say Harris perpetuated mass incarceration — especially of Black males — and upheld wrongful convictions. Despite her identity as a biracial Black woman and the fact that her prosecutorial record was arguably cleaner than most other state attorney generals, Harris’s years in office irreparably hurt California’s Black population.

What makes identity politics so dangerous is the assumption that a person’s political values are determined by their racial identity. It conflates race and gender with track records and values.

While it’s important to acknowledge the historical importance of Harris’s appointment as a Black and South Asian woman, it’s also important to acknowledge (if we’ve learned anything from POC right-wing spokespeople like Candace Owens and Nikki Haley) that after a certain point, a political figure’s racial or gender identity becomes nothing more than semantic value.

Although it’s important to look closely at Harris’s track record and the validity of her support system, when does interrogation become hypercritical and harmful?

To answer this question, we can take a look back at Hillary Clinton’s 2016 campaign. During the 2016 primary elections, Clinton was placed under immense scrutiny over a series of deleted emails and scandalous conspiracy theories. These controversies not only caused relentless attacks from members of the Republican party, but also caused a good portion of the Democratic party to question the validity of her candidacy.

The Democratic party’s internal divide over Clinton’s credibility (aided by the atrocious turnout rate) was a huge factor in the 2016 loss.

It is important to avoid complacency and actively interrogate the position of a political candidate, but it’s not unreasonable to say that things might have turned out differently if the Democratic party had decided to acknowledge Clinton’s shortcomings but still full-heartedly rally behind her campaign. In essence, it’s also important to be cognizant of when the interrogation process turns into beating a dead horse.

This same sentiment applies to Harris. While we can — and should — be critical of her political history, we also need to beware of not being detrimentally skeptical. In the words of Biden, the 2020 presidential election is a fight for the soul of America and it is imperative for Democrats to get caught on ideological nuances and lose sight of the larger implications of the election.

In fact, as hard as it might be for some, it is time for Democrats to start focusing on the compelling aspects of Harris’ track record including, but not limited to, her progressive Senate voting record, her in ending rape kit backlogs and her fiery and awesome cross-examination style (good luck, Pence) and because no amount of anti-Harris rhetoric is going to change the fact that she’s the Democratic vice president pick.

There is a middle ground between tacking posters of Harris on our front porches and not voting at all. The best decision this fall is to vote for the Biden-Harris ticket, even though it falls short of most progressives' aspirations.