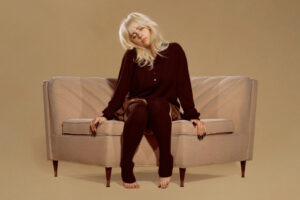 Billie sits on a beige couch during a promo photoshoot for her album, showing her brand’s new, candid style.

The elegant, cursive text of “Happier Than Ever” adorns the warm, beige-toned album cover. An off-shoulder cardigan lays effortlessly across pop sensation Billie Eilish, who, with her hair dyed platinum blonde, is embracing herself. Unlike her previous album “When We All Fall Asleep, Where Do We Go?” featuring a dark background and coy smile, her expression is serene, indicating a drastic change in her music style and aesthetics.

On July 30, Eilish released her second album, “Happier Than Ever.” Soon after its debut, it rose to No. 1 on the Billboard 200 hundred chart, with over 1.028 million pre-orders on Apple Music, making it the most pre-saved album in the platform’s history.

All 16 songs on the album embody the growth that occurs as a teenager transitions into adulthood. The bold and enchanting lyrics along with new musical genres illustrate her growth both as a musician and person.

A few songs especially stand out from the rest: “Getting Older,” “Halley’s Comet,” “Not My Responsibility,” “Happier Than Ever” and “Male Fantasy.” These songs are especially striking because of their emotional and thematic lyrics as well as impeccable vocal techniques.

Eilish starts off the album with “Getting Older,” a self-reflective piece that explores her anxiety over aging, while showcasing her thoughts on self-love and growing up in the spotlight. The song begins with a choppy melody, resembling the distorted progression of time on a broken clock. The lively beats in the instrumental vary in pitch, evoking an image of gradual growth. Eilish’s soft voice meshes flawlessly with the melody, and the lyrics poignantly describe her challenging relationships and her learning to grow up.

Another gripping piece on the album, “Halley’s Comet,” brings back Eilish’s famous angelic but dark-toned, whispery sound. Unlike the rest of the album, the song utilizes Bob-Dylan-styled chords as it elucidates the wondrous yet wavering feelings of falling in love. Eilish’s vocals mesh with the mellow piano tracks, constructing a world of her uncertainties and excitements about falling for someone. The song concludes with a clouded effect over her voice, symbolizing Eilish’s fear and uneasiness of being vulnerable.

Diverging from the otherwise calm energy, “Not My Responsibility” takes on an aggressive tone. A critique of the media, the song was first revealed as an interlude during the “Where Do We Go?” World Tour in 2020. The piece scrutinizes the people who criticize her body and shame her clothing choices.

The song reflects Eilish’s complaints of constantly being under the public eye and not having room for mistakes. She questions her audience, “Is my value based only on your perception? Or is your opinion of me not my responsibility?” The brashness of these questions shock listeners by conveying how often teenage girls are sexualized in the media.

On the other hand, “Happier Than Ever” begins with a calm melody, but gets bolder toward the end through its gradually intensifying basslines and drum beats accompanied by stronger vocal techniques, surprising listeners with the change. Such a shift illustrates the progression of her feelings towards her ex, concluding with utter rage. Eilish takes an entirely new approach to her singing, experimenting with rock sounds and aggressive background screams, creating a masterpiece and arguably the best song off the album.

The last track on the song, “Male Fantasy” depicts the pain of heartbreak and recovering from the loneliness and resentment of a breakup. Its powerful lyrical content combined with Eilish’s soothing voice makes this song stand out from the rest. Rather than ending the album optimistically, Eilish leaves listeners on a somber note.

Each track plays a role in transforming the album into an intricate story. Some songs bring tears through their melancholy lyrics, while others make the listeners smile through their empowering instrumentals.

“Happier Than Ever” motivates audiences to draw connections between the lyrics and their experiences.  We’d give the album a high rating: 4.5 out of 5 Falcons. It’s not just another pop album you bop your head to when you hear it play on the radio; it’s something every listener can resonate with as they reflect on their own journey growing up.