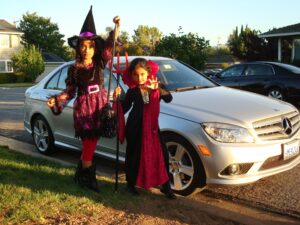 When I moved from India to America in second grade, I learned about Halloween: a holiday where kids dressed up as fictional characters and traveled across dark neighborhoods in hordes, receiving free candy from even the most ominous-looking houses. For the Harry Potter and dark chocolate enthusiast that I’ve always been, this should’ve been the ultimate paradise.

Unfortunately, it wasn’t. As much as I tried to enjoy Halloween, the holiday was plagued by different disasters every year that left me disappointed, embarrassed or both.

My first Halloween started deceptively well: When I was only 6 years old, my mom took me and my friends trick-or-treating around my un-spirited and lonely neighborhood. Since we were virtually the only kids there, every house gave us all of its candy, and we left with Trader Joe’s bags filled to the brim with sweets.

However, when we returned home (at around 5 p.m. when the sun had barely set), my mom realized she didn’t have any candy to give to trick-or-treaters herself, so my entire stash was donated to the other greedy neighborhood kids who swarmed our house. By the end of the night, I was left sad and empty-handed.

My second Halloween went no better: That year, my mom decided that she was morally against distributing cavity-inducing candy to unsuspecting children. So when the kids came around begging for candy, I was assigned the gloomy task of rejecting every desperate child. At some point, I began pretending no one was home, in order to avoid the dejected and hateful stares I received. (Closing the blinds and hiding under the dining table while kids repeatedly rang the doorbell was definitely one of my lowest moments).

By the third year, I didn’t expect much from Halloween. But, while I was wallowing in the misery that would be another tragic Halloween, everything changed for the better.

A friend decided to celebrate her birthday on Halloween, and we were all going to spend the day together trick-or-treating and then sleeping over. As an added bonus, the celebration was going to be held at The American Girl store, a version of heaven that my 9-year-old self had never had a chance to go to myself. I was ecstatic, but I should’ve known it was too good to be true.

Disaster struck once more the evening before Halloween, this time in the form of pink eye.

I couldn’t go to the party, so I was left, once more, friend-less, lonely and disappointed on Halloween.

Luckily, my mother crafted what she believed to be an ingenious solution: neon orange swim goggles.

Decked out in my armor of orange goggles and a hand-me-down witch costume, I paraded around the neighborhood in embarrassment and received pity-candy from every person that was unlucky enough to witness the scene.

Looking back, I’m impressed by my Halloween bravery.

After three consecutive years of disappointment, I learned to give up on Halloween. Through most of middle and high school, nothing has really changed, so here’s to hoping that this year’s Halloween might be marginally better than the past ones have been.

I don’t think it could get any worse.