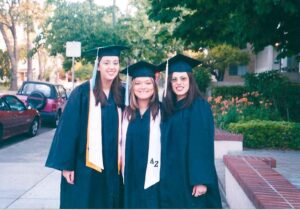 Photo by Monique Young
On her graduation day, Young stands in front of her sorority with two of her best friends.

Permalink
Young has taken roughly seven different jobs to get to where she is now, and is thankful for all she has learned along the way.

Inspired by her own teachers, who she said gave her a “safe space” while having lots of anxiety at school, Young aspired to follow in their footsteps. She majored in Child Development in her undergraduate studies at San Jose State University (SJSU), hoping to become an elementary school teacher.

Before choosing her major, however, Young took up a variety of jobs unrelated to counseling that would later provide the foundational skills needed for her current job.

At 16, Young took up her first job as a mall assistant for Montgomery Ward, a national department store chain that went out of business 20 years ago. There, she developed vital life skills — including communication and listening skills — which proved useful in future jobs. Customer service experiences, such as dealing with grumpy customers in peak holiday season and working with colleagues who were constantly late, called in sick or “super flaky,” taught her how to deal with last-minute changes.

As Young graduated high school and transitioned into college, she became a manager for Red Eye, a smaller clothing store at Oak Ridge Mall in San Jose. A popular place to hang out with friends, the store now holds some of Young’s favorite memories. She recalls blasting Spice Girls, NSync and Backstreet Boys, personalizing her name badge with stickers, getting first-dibs and discounts on the latest fashion offers and forming some of her closest friendships.

“It’s rare for kids now to spend their summer working or even work while they’re in school,” she said. “I often tell my students that they should spend their time doing something worthwhile. Getting a job when you’re in your teens allows you to create professional references and start a trail of your professional life.”

The work experience Young gained early on allowed her to become the store manager of a new Red Eye site in the beginning of college, now closed, at the NewPark Mall in Fremont. She largely credits her promotion to the experience she gained at her high school jobs, where she found people who “vouched for her” and developed skills such as punctuality and responsibility that helped people find her trustworthy.

In college, Young was also heavily involved with her sorority, where she formed some of the closest friendships to date.

“It was a place for me to grow and not be so anxious about things anymore; I got to reinvent myself and try new things,” Young said. “All of my best friends now, in my early 40s, are from my college sorority.”

Her friends encouraged her to become involved with leadership and community service, which introduced Young to a range of activities she didn’t experience in high school due to family issues, such as homecoming and fun skits, which she continues to participate in at Saratoga High.

Young also worked two jobs simultaneously to help with expenses: She worked as a waitress at a local bar three to four nights a week as well as the Recreation Leader for the city of San Jose five days a week, where she was in charge of planning after school programs for children of all ages.

After completing her major, she began her first internship in a first grade classroom. However, Young realized that working with young children was not her calling.

“At the time, working with little kids wasn’t enjoyable for me,” Young said. “High School kids are a bit more mature, independent and need a different type of guidance.”

Choosing the right major or dedicating themselves to a lifelong career is daunting for many high school students — roughly 80% of college students change majors at least once, according to an NCES report. And she cautioned against having inflexible plans.

“Nobody says you have to get [your education] done by a certain age,” she said. “I know a lot of people feel pressured to finish high school, get a bachelor’s degree and immediately get a master’s degree within a specific timeframe, but as you can see from my experience, I was doing just fine and took just a bit longer to find my forever career.”

While it took Young a few years after she graduated with her BA in Child Development to figure out that she wanted to get her graduate degree in Educational Counseling, she took up a few jobs to pay for college tuition in the meantime.

Young initially bartended for a restaurant in a nearby golf course to help pay for college tuition, and was later promoted to event coordinator. She continued with her masters credential program at SJSU while simultaneously working full-time as an event coordinator for special events, weddings and tournaments, where she worked with vendors like DJs, florists and photographers.

Like the previous jobs she held in her high school years, Young learned how to deal with stressful clients, a process she said was similar to counseling. She found that she loved helping couples feel secure that their special day would run smoothly, but longed to work in an educational setting.

“I still really wanted to be in education. At that point, I looked back at the masters programs and realized that counseling could be what I’m doing for the rest of my life,” Young said, noting the similarities between counseling and event coordinating. She began her internship at Pioneer High School and was quickly promoted to guidance counselor after the principal noticed her work.

Even though her salary working as a guidance counselor was less than the amount she received as event coordinator, Young said taking a salary cut was worth working for her “forever job.”

“I loved planning the events in my mid-20s, but I like our school schedule now,” she said. “The work I’m doing is more meaningful in the long run, serving the population of high school students.”

Young said being a guidance counselor is also more fulfilling, as she has experienced different issues concerning her family, personal life loss and difficult relationships — hardships that have allowed her to relate to students. One of her favorite aspects of the job is providing her own life experiences to help students make better, more informed choices in their lives.

“I really like to be able to support you, whether happy or sad, positive or negative,” Young said. “I enjoy giving information and being a part of family discussions to help you and your families make choices in life.”

Young recalls one of the most memorable moments in her guidance counselor career: When she was working at Pioneer High, the principal warned that one of her students was a top member of a gang. Expectantly cautious, Young was surprised to find that the student was the “sweetest, most normal” kid who was unmotivated and behind in graduation credits. She formed a close bond with the student and was able to motivate them, helping them graduate from high school.

“I’ve met many kids who have had different struggles in their lives, and now seeing some of those kids in their 30s with families and great jobs is extremely rewarding,” Young said. “I love our school because it’s always positive here and we’re more in-tune and aware of the mental health issues that kids go through. I think we have a lot of support for that and it’s more openly talked about.”